Edit
watch 02:34
Fire Emblem Warriors: Three Hopes - The Loop
Do you like this video?
Play Sound

The car is #2, driven by Klaus Ludwig and Ricardo Zonta, who won in the GT1 class of the 1998 FIA GT Championship.

This car appears under different names depending on the game and version. Note that the name used before GT5 version 1.07 is incorrect.

"Replacing the heavy V12 with a V8, this was the race car that dominated the FIA GT competition."

To compete in the FIA-GT championship that began in 1997, DaimlerChrysler and AMG began a joint project to develop a racing machine in just 128 days. This car was the Mercedes-Benz CLK GTR. The front grille of the car comes from the CLK, but the rest of the car is a pure racing machine. The body skeleton is a carbon-fibre-composite monocoque with a steel roll cage, and a body with a giant air intake on the roof covers this chassis.

Mounted amidship behind the seat is a 5,000 cc V12 that produces 591.7 BHP. Even though the CLK GTR was never tested adequately, it had an astonishing debut year winning 6 of 11 races and making Bernd Schneider the series champion.

In the following 1998 season, Porsche developed and introduced the 911 GT1 and thus began a struggle between the two cars. Because of this, in addition to the two works cars that Mercedes entered in the FIA GT, they also provided two CLK GTR’s to private teams in order to strengthen their efforts on the track.

For the 24 Hours of Le Mans, they entered the CLK LM, the successor to the CLK GTR. The major difference between the LM and the GTR was the engine; the V12 engine was replaced with a lightweight V8. In addition, the radiator was moved to the side, the body was redesigned, and the suspension was changed to a pushrod system, achieving a more Formula-style control characteristic.

The CLK LM did not finish the Le Mans, but subsequently became the FIA GT championship works machine. As a result, the GTR and LM won 10 out of 10 races, a perfect victory. The team of Klaus Ludwig and Ricardo Zonta produced 5 wins.

This CLK-LM is one of the most attractive racing cars ever produced by Mercedes-Benz. It only competed for a few years in the late 90’s, in GT1, then the pinnacle of touring car races. GT1-class regulations only required an automaker to build one street car to be approved for competition. Despite their appearance, the resulting street cars were in fact full-fledged racing cars at heart. The CLK-LM’s predecessor, the CLK-GTR, was produced under these regulations in 1997. When the FIA GT World Championships began that same year, the CLK-GTR took home title victories. This CLK-LM is a further evolution of the CLK-GTR. The replacement of the V12 engine with a V8 led to an improvement in the machine’s overall balance. As soon as it debuted at the ’98 FIA-GT Championships, it embarked on a winning rampage, taking home both the drivers’ and manufacturers’ world championship titles.

This car can only be obtained by winning the Deutsche Touring Car Meisterschaft in the European Events Hall. It cannot be purchased in the Mercedes-Benz dealership.

Alternatively, it can be obtained by achieving all gold in the Intermediate level of the AMG Driving Academy.

This car can occasionally be purchased from the Legend Car Dealership. As of June 2022 the car is priced at 6,500,000 Credits. 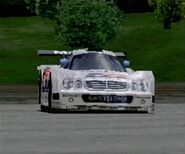 A render of the 1997 CLK-GTR as shown in issue 68 of Edge magazine. This render also appeared in a memory card sticker set from The PlayStation magazine in Japan. It appears to be #10, driven by Alessandro Nannini (with Marcel Tiemann as primary co-driver) which won the 1997 FIA GT Championship's GT1 class team championship. Note the unfinished model with D2 decals missing, as well as the Warsteiner decals on the front bumper and hood. 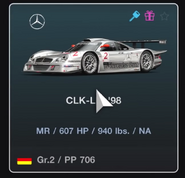 A clip from GT7's Behind the Scenes: Powered by PS5 trailer, where it has been classed as a Gr.2 vehicle.