The Acura NSX '93 is a mid-engined, rear-wheel-drive sports car produced by Acura. It only appears in Gran Turismo, Gran Turismo 2 and Gran Turismo 3: A-Spec, being overshadowed by its 1991 and 1997 equivalents.

There are fourteen colors available for this car, except in GT3, where only the first six are available :

This description is taken from the original Gran Turismo:

The NSX is the world's first aluminum production car. Every major component is constructed of aluminum or light weight, which provides an outstanding power-to-weight ratio and excellent handling. Like the chassis, the suspension is made entirely of aluminum. It features double wishbone suspension, front and rear, with special gas-pressurized Honda Progressive Valve-equipped shock absorbers. Powering the NSX is a 3.0-liter, DOHC, 24-valve V6 engine that produces 270 BHP. This engine features a unique Variable Valve Timing and Lift Electronic Control (VTEC) system, which varies the lift and duration of each cylinder's four valves to optimize both low-end torque and high rpm performance. The NSX can achieve a track-tested top speed in excess of 165 mph, acceleration from 0 to 60 mph in 5.03 seconds,[1] and run the 1/4 mile in under 14.0 seconds.[1] The NSX is designed to represent an entirely new definition of the exotic sports car.

This car can be bought at the Honda/Acura Used Cars dealership for around 62,000 Credits. It is only available in the NTSC-U version of the game.

This car can be bought at the Acura dealership for 95,000 Credits. It is only available in the NTSC-U version of the game.

This car can be bought at the Acura dealership for 99,570 Credits.

The vehicle banner as it appears in the NTSC-U version of Gran Turismo 2. 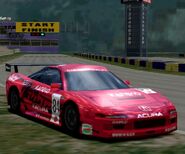 Retrieved from "https://gran-turismo.fandom.com/wiki/Acura_NSX_%2793?oldid=154467"
Community content is available under CC-BY-SA unless otherwise noted.