Six colors are available for this car:

"The top model of the RSX, balancing both comfort and sporty elements."

The Honda Integra was known as the Acura RSX is the U.S. The model lineup originally released in Japan featured two versions, the speedy and powerful Type-R and the tamer iS, however, no Type-R was included in the U.S. mix. Instead, Acura designated the Type-S as their top-of-the-line model for the states.

The RSX Type-S was sporty, but wasn't as hardcore as the Japan-market Type-R. The Type-S blended a high degree of comfort into its formula, making it a proficient daily commuter as well as a fun track car. Under the Type-S's hood was the K20A, a 2.0 liter DOHC inline-4 that produced 200 HP and 141.7 lb-ft of torque. In comparison, the Japanese Type-R put out 217 HP and 151.8 lb-ft of torque, while the more modest iS generated 158 HP and 141.0 lb-ft of torque. This made the Type-S fit right in between the Type-R and iS in terms of performance.

In 2004, Honda dropped the iS from the lineup in Japan and replaced it with the Type-S. This Type-S was a bit different than its American counterpart, however, because it retained the lower 160-ps output of the iS. Bit it did sport some body parts of the U.S.-spec Type-S. Unfortunately, the coupe market slumped in Japan, and sales of the RSX slowed in the iS causing Honda to stop the production of the Integra altogether in 2006.

This car can be bought at the Acura dealership for 24,740 Credits.

As a standard car, the Acura RSX Type-S '04 occasionally appears in the Used Car Dealership, costing around 24,740 Credits. It is a Level 1 Car.

This car can be purchased for 24,740 Credits. It is a simplified car. 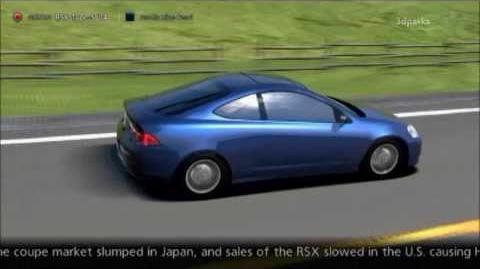 Retrieved from "https://gran-turismo.fandom.com/wiki/Acura_RSX_Type-S_%2704?oldid=141969"
Community content is available under CC-BY-SA unless otherwise noted.