Ten colors are available for this car:

"A monster front-wheel drive with a unique look and incredible performance."

The 147 represented part of Alfa Romeo's new philosophy of on-the-edge styling with straightforward driving character when it made its debut at the Turin Motor Show in 2000. Derived from the same platform as the popular 156, but in hatchback form, the 147 represented the successor for 145 and 146.

The car's dimensions were what you would expect from a compact hatchback; measuring 166 inches, 68 inches, and 56 inches overall length, width, and height respectively. It weighed in at a lean 1200 kg, making it as agile as it was economical.

The engine variations were relatively abundant, including a 118 BHP 1.6-liter inline-4 and a 147 BHP 2.0-liter inline-4. There was also a diesel engine in the mix, a 1.9-liter unit. In May 2003, the GTA was added, equipped with a 3.2-liter DOHC V6 that pumped out an impressive 246 BHP and 221.3 ft-lb of torque. It came mated to a 5-speed and 6-speed manual gearbox, as well as the Magnetic Marelli-built Selespeed semi-automatic transmission.

The combination of choice was the V6 with the Selespeed gearbox. It made the driving experience similar to that of piloting a Touring race car. It even looked the part because of widened fenders that housed wide 225/47R17 tires. The car could reach a top speed of 153 mph making it one of the most formidable and hottest hatches in the world.

This car can be bought at the Alfa Romeo New Cars Dealership for 48,040 Credits.

As a Standard car, the Alfa Romeo 147 GTA '02 can be purchased from the Used Car Dealership for approximately 43,693 Credits. It is a Level 2 car.

This car can be purchased for 48,040 Credits. It is a simplified car. 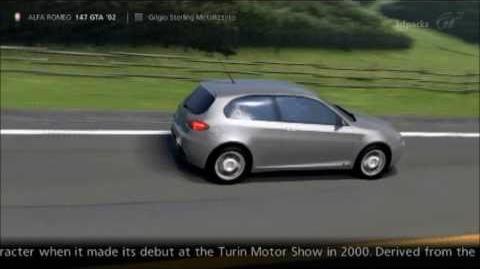 Retrieved from "https://gran-turismo.fandom.com/wiki/Alfa_Romeo_147_GTA_%2702?oldid=141904"
Community content is available under CC-BY-SA unless otherwise noted.