There are ten colors available for this vehicle:

Alfa Romeo is renowned for producing some of the best driver's cars in the world and the 155 sports saloon was no exception. At the heart of the 155's appeal was its mouth-watering choice of engines. Available with either a 1.8, two litre or 2.5 litre V6 unit, one thing all the powerplants had in common was the traditional Alfa snarl. They had the bite to match the bark too. With power ranging from 126 BHP for the 1.8 litre through to 163 BHP for the V6, all three engines ensured the ability to accelerate hard. The 1.8 litre managed the sprint to 62 mph in just 10.3 seconds, the two litre managed the same in 9.3, while the V6 shaved nearly a second off that again. Both the four cylinder cars could get the right side of 125 mph too, while the V6 could muster a license losing 140 mph. The handling of the 155 was greatly improved in 1995 when, following the motorsport success of its British Touring Car Championship counterpart, it received a wider track and bigger wheels. MacPherson struts up front and trailing arms at the rear remained unchanged, but there was the addition of a new ultra quick steering rack. With an amazing 2.1 turns lock to lock, the steering gave the 155 the directional agility of a track car. Externally the 155 was always something of a head turner, though its sharp, angular looks, weren't to everyone's taste. The 155 did manage to win new friends with its 1995 makeover though when, in addition to the mechanical changes mentioned, it received a lowered ride height. It also gained some bulging wheel arches which in turn, housed a set of Touring Car style black alloy rims.

This car can be purchased at the Alfa Romeo dealership for 11,860 Credits. 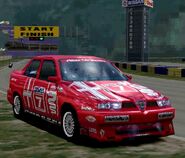 Retrieved from "https://gran-turismo.fandom.com/wiki/Alfa_Romeo_155_2.0_TS_16V?oldid=134630"
Community content is available under CC-BY-SA unless otherwise noted.