There are eleven colors available for this vehicle:

The Alfa Romeo 156 was designed to be as entertaining to drive as it is visually exciting[1]. From its introduction in 1997 the 156 was ranked as one of Europe's most desirable sports saloons, with affordability and the practicality of a four-door family saloon thrown in too. Beneath the 156's aerodynamic coupe-like body hides a chassis focused on fun. The indipendent suspension has front double wishbones and an anti-roll bar, while the rear features MacPherson struts with transverse rods that angle the wheels into a bend to provide stability under on-the-limit cornering. Responsiveness is increased by incredibly direct power steering, while stopping power is boosted by an anti-lock braking system. The 156 line-up includes 1.6 litre, 1.8 litre and turbodiesel versions, but the performance models are the 2.0 T. Spark and the 2.5 V6. The 2.0 T. Spark has a sweet-sounding four-cylinder, 16-valve engine with variable valve timing and a variable intake manifold, putting 155 BHP at 6,400 rpm through the front wheels. The 2.5-litre V6 version adds to this a pair of extra cylinders and electronic throttle control to give 190 BHP at 6,000 rpm. Neither are sluggish, with the 2.0 T. Spark taking 8.6 seconds 0-62mph and going on to 134 mph, while the 2.5 V6 needs just 7.3 seconds to do the same before reaching a 142 mph top whack. Transmissions are a five-speed manual for the 2.0 T. Spark or a six-speed semiautomatic, complete with F1 car-style shifter buttons on the steering wheel. The 2.5 V6 gets a six-speed manual. Tyres on the 2.0 T. Spark are 185/65 R15s, while the 2.5 V6 benefits from grippier 205/55 R16 low profiles. Dreamt up at Alfa Romeo's Centro Stile studio near Milan, Italy, the 156 replaced the unpopular 155 and was widely welcomed as the first seriously sporty alternative to the BMW 3-Series and Audi A4. The 156 was named European Car of the Year 1998.

This car can be bought at the Alfa Romeo dealership in West City for 34,530 Credits. 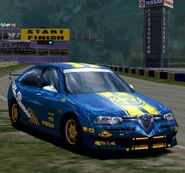