The Alfa Romeo GTV is a Ferrari for the masses. Well, almost. From its 1995 European introduction the strikingly stylish GTV coupe has been rated as one of the few proper sports cars in a market full of coupes aimed more at posing than performing. Hiding beneath the GTV's unique Italian-designed wedge-shaped bodyshell is a chassis honed by the Alfa Romeo engineers to put a big grin on drivers' faces. The all-independent suspension has simple space-saving MacPherson struts at the front with lower wishbones and an anti-roll bar, while the rear benefits from a sophisticated multi-link set-up also stabilised by an anti-roll bar. The pursuit of raw thrills means that artificial driver aids are kept to a minimum. In fact all the GTV comes kitted-out with an ABS anti-lock system to ensure strongest stopping power in all conditions and very pointy power steering that takes just 2.1 turns to twirl from lock-to-lock. With no traction control the job of getting all the power to the tarmac through the front wheels rests with a set of extra-sticky 205/50 R16 low-profile tyres. In all markets outside Italy the GTV has just a two-model range, featuring a choice of a two-litre, four-cylinder 16-valve Twin Spark engine with variable valve timing plus a variable inlet manifold to give 155 BHP at 6,400 rpm, or a charismatic three-litre, 24-valve V6 pumping out 220 BHP at 6,300 rpm. The 2.0 TS has a five speed manual gearbox while the 3.0 V6 has a five-speeder or, from 1999, a six-speed manual 'box. Expect swift rather than outrageous performance from the 2.0 TS, turning in the benchmark 0-62 mph acceleration time in 8.4 seconds and going on to reach a 134 mph maximum. The 3.0 V6, however, whips to 62 mph in just 6.7 seconds and tops out at 149 mph. Not quite Ferrari quick, but nearly.

This car can be bought at the Alfa Romeo Dealership in West City for 49,070 Credits. 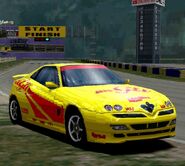 Retrieved from "https://gran-turismo.fandom.com/wiki/Alfa_Romeo_GTV_3.0_V6_24V_%2798?oldid=134647"
Community content is available under CC-BY-SA unless otherwise noted.