For the standard version of the same car, see Alpine Vision Gran Turismo.

The Alpine Vision Gran Turismo Race Mode is a concept race car by Alpine that appears in Gran Turismo 6 (as part of Update 1.17) and Gran Turismo Sport. This is a single seat sports car containing the essence of Alpine tradition and the future.

"A jewel of a car containing both the tradition and future of Alpine."

Alpine, the French sports car brand par excellence, is back. On track, it was the A450’s victory in the European Endurance Championship that put a smile back on enthusiasts’ faces in 2013. On the road, it is the market launch of a breathtaking sports car in 2016 that has instantly stirred the interest of the public and the impatience of future customers.

Since its creation back in the mid-1950s, Alpine has built a legend informed by passion and a taste for challenges. With its light, agile, efficient and elegant sports cars, Alpine has consistently taken on and often defeated the most powerful and prestigious automotive leaders.

Today, the people at Alpine are proudly bringing Gran Turismo players a sports car as unique as it is fascinating: the Alpine Vision Gran Turismo. The sleek and distinctive vehicle, developed exclusively for the world’s most famous vehicle simulation game, was created by the same dedicated designers and engineers who are working on the future production model. So it comes as no surprise that the Alpine Vision Gran Turismo explores the key Alpine themes of agility, pleasure and style to the hilt.

Agility is a defining characteristic of the road behavior of an Alpine. Alpine cars are designed to bring drivers at-the-wheel pleasure at all times and have a particular way with corners. The heady pleasure felt on board an Alpine stems from the feeling of being one with the machine. With their limited mass, Alpines respond instantly and seamlessly to the driver’s input. And they have always stood apart through their innate sense of beauty and style, on road and track alike.

The Alpine Vision Gran Turismo, in its own distinctive way, features all these ingredients.

In the rear body styling, aficionados will see a nod to Alpine race cars such as the A210, energy efficiency champion winning its class at the 1966 Le Mans race, the A442B, overall winner of the 1978 Le Mans, and the A450, victorious in the LMP2 category in the 2013 ELMS competition. Players of all ages will admire the car’s original, low-slung flanks, redolent of lightness and aerodynamics. They will also be surprised by the richness of the creative details, as seen in the side air brakes. The Alpine Vision Gran Turismo will unleash the curiosity of all comers, discreetly featuring a few traits of secret inspiration that echo the future production model. But above all the Alpine Vision Gran Turismo pursues the ambitious aim of bringing Gran Turismo players a preview of the impressive road manners of the future sports car.

Weaving a winning link between past and future, road and track, and virtual and real, the Alpine Vision Gran Turismo has a soul. And, above all, it conveys the enthusiast spirit of the teams who are designing tomorrow’s passion today.

The player can purchase this car from the Vision Gran Turismo dealership for 1,000,000 Credits.

This car can be purchased in the Alpine section of Brand Central for 1,000,000 Credits. 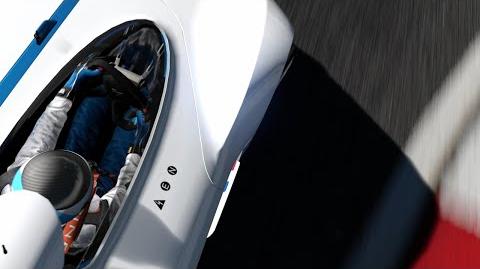 Retrieved from "https://gran-turismo.fandom.com/wiki/Alpine_Vision_Gran_Turismo_Race_Mode?oldid=152553"
Community content is available under CC-BY-SA unless otherwise noted.