The Aston Martin DB7 Coupe is a road car produced by Aston Martin. It only appears in Gran Turismo and Gran Turismo 2, being replaced with the DB7 Vantage Coupe in later games of the series.

The player can choose six colors (seven in the original Gran Turismo) upon buying this car.

One of the world's most beautiful cars is also one of the best at crossing huge distances at indecent speeds. The DB7 has been yearned for by the rich and famous since its launch worldwide in coupe form in 1994 and as a Volante convertible two years later. Disguised beneath that to-die-for British-built body are suspension components and an engine borrowed from cheaper Jaguars. However, extensive modifications to these shared parts have meant that the DB7 driving experience has been rated as more than worthy of the famous badge and exclusive price tag. The chassis comprises double wishbones front and rear complete with coil springs and anti-dive geometry. Spring and damper settings are designed for superb ride comfort, with anti-roll bars front and rear included to limit wallow in corners. The Volante has a softer set-up and lacks the rear anti-roll bar. Enormous grip is provided by gigantic 245/40 R18 ultra-low profile tyres, with traction aided by a limited-slip differential. Power-assisted steering is speed sensitive and anti-lock brakes provide skid-free stopping in all conditions. A single choice of a 3.2-litre, 24-valve in-line six-cylinder engine does the business under the bonnet, boosted by an intercooled Eaton supercharger to give a hefty 335 BHP at 5,750 rpm. Gearbox choices are a close-ratio five-speed manual or an electronically-controlled four-speed automatic, driving through the rear wheels. DB7s are fast enough for serious mischief, though performance times aren't quite the match of the most exotic supercars. Both coupe and Volante are capable of thrusting from a standstill to 62 mph in just 5.7 seconds, with the coupe going on to nudge 165 mph and the 100 kgs-heavier Volante topping out at 155 mph. Despite the introduction of the cheaper, faster Jaguar XKR in 1998, the DB7's continuing desirability means that it has now been confirmed as the most successful Aston Martin ever produced.

This car can be bought at the Aston Martin dealership for 150,000 Credits. A special colored variant of this car is the prize for winning the Megaspeed Cup. The special colored variant has a chance of 1/2 (50% of probability) to come as a prize car. It is also one of the playable Aston Martin cars in Arcade Mode available from the start, listed under Class A. However, in the NTSC-J version of the game, this car isn't available from the start in Arcade Mode, and must be unlocked.

This car can be purchased from the Aston Martin dealership for 173,000 Credits.

The Aston Martin DB7 Coupe as it appears in the original Gran Turismo. In this picture is displayed the Yellow color scheme, only available in that game. 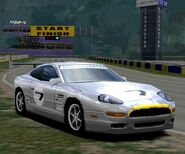 The special colored variant of the Aston Martin DB7 Coupe in the original Gran Turismo.

The special colored variant of the Aston Martin DB7 Coupe in the original Gran Turismo, with racing modifications applied. It differs from its regular counterpart for the red rims.