The player can choose six colors (seven in the original Gran Turismo) upon buying this car.

Aston Martin released this DB7 in 1994. It is the new generation of the famous DB car that had been discontinued 20 years earlier. The styling of the 2+2 coupe fully expresses Aston Martin's ideas about sports cars, and evokes the cars of the good old days. The engine is a 197 cu in inline, 6-cylinder 24 valve, supercharged DOHC engine, delivering maximum power of 335 BHP and peak torque of 362 lb ft. Transmission is available in 5-speed manual and 4-speed automatic, while suspension is provided by a double-wishbone system. Brakes are ventilated discs on both sets of wheels. The supercharged engine accelerates with a seamless surge of power and pulls the large 3,750 lb car along with vigor. Its maximum speed is 160mph, even in automatic. In 1996 the convertible DB7 Volante was added to the line up.

This car can be purchased from the Aston Martin Dealership for 185,500 Credits.

The Aston Martin DB7 Volante as it appears in the original Gran Turismo. In this picture is displayed the Yellow color scheme, only available in that game. 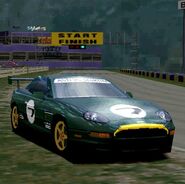 Retrieved from "https://gran-turismo.fandom.com/wiki/Aston_Martin_DB7_Volante?oldid=134688"
Community content is available under CC-BY-SA unless otherwise noted.