The Audi A4 2.8 quattro is a Road car produced by Audi. It so far appeared only in Gran Turismo 2, before being overshadowed by the Audi S4 '98 and replaced with the Audi A4 DTM.

The player can choose fourteen colors upon buying this car.

At the heart of the quickest A4 Sedan is Audi's renowned quattro[1] all-wheel drive technology. Superb traction is provided in all weather and road surface conditions by the quattro[1] system's permanent distribution of power to all four wheels via a torque-sensing center differential. The 2.8 quattro's[1] chassis also features independent four-link front suspension and double control arms in the rear for the nimble handling expected in a sports sedan. Providing the go is a 2.8-liter, 30-valve V6 engine boasting both variable valve timing and a variable intake manifold, giving 190 BHP at 6000 rpm, and 207 lb-ft of torque at 3200 rpm. At its launch in 1996, the A4 2.8 quattro[1] was welcomed in Europe and the USA not just as one of the best handling all-round family cars, but also as one the very grippiest cars available. This is not your typical sedan.

This car can be bought at the Audi dealership in North City for 50,530 Credits. 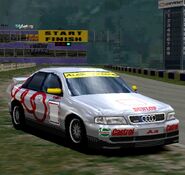 An Audi A4 2.8 quattro with racing modifications applied. It appears to resemble the #7 driven by John Bintcliffe, who achieved 15th place overall in the 1998 BTCC season.

Retrieved from "https://gran-turismo.fandom.com/wiki/Audi_A4_2.8_quattro?oldid=149175"
Community content is available under CC-BY-SA unless otherwise noted.