The Audi R8 (Typ 42) is a mid-engined sports car introduced by the German automaker Audi in 2007.

The first appearance of the car was in 2006, appearing at auto shows and events all over the world. The R8 is based on the Lamborghini Gallardo platform, as Audi currently has full ownership of subsidiary Automobilii Lamborghini S.p.A.

Audi announced in 2005 that the name of the successful Audi R8 race car would be used for a new road car in 2007, the Audi R8, based on the Audi Le Mans Quattro concept car, appearing at the 2003 Geneva Auto Show and 2003 International Motor Show. The R8 was officially launched at the Paris Auto Show on 30 September 2006. There is some confusion with the name, which the car shares with the Le Mans winning R8 LMP. Originally, many thought the car would be called the R9 (as there is a gap in numbering left when Audi announced the R8's successor, the diesel-powered R10).

The R8 is used as a safety car in Deutsche Tourenwagen Masters racing series. 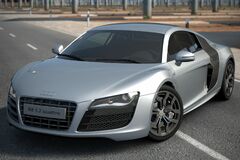 Retrieved from "https://gran-turismo.fandom.com/wiki/Audi_R8_(road_car)?oldid=149017"
Community content is available under CC-BY-SA unless otherwise noted.