There are fifteen colors available on this vehicle:

"Contrary to its modest looks, its mechanics are at the next level. A 4WD sports saloon for mature drivers."


Two years after the Audi premium sedan, the A4 made its debut in 1995, the company from Ingolstadt, Germany, unveiled the sporty variant wearing the heralded "S" emblem. The "S" in S4 stood for sport, but enthusiasts knew it stood for much more than that. Simply put, it turned the sheepish-looking sedan into a wolf.

To keep its sheep-in-wolf's-clothing theme true, Audi opted not to overly spice up the car's exterior, however if you look closer, you'll see bigger wheels that measure 17" in[3] diameter, a larger vent in the front spoiler to cool the brakes and twin exhaust pipes, all of which set the S4 apart from the A4. Inside the heart of this mechanical canine is a formidable powerplant. Powering all four wheels is a 2671-cc twin-turbocharged DOHC[4] V-6 with the company's valve-timing technology. It pumps out 261 HP at 5800 rpm and peak torque is rated at 295.1 lb-ft[5] from 1850 to 3600 rpm. It comes mated to a 6-speed manual gearbox.

Managing the torque between the four wheels is Audi's venerable quattro[6] all-wheel-drive system. The car's suspension remains relatively the same with the A4's, but spring and damper rates were tuned for better performance. The end result is a sports sedan that can outrun many sports cars of its day, yet exhibit a a smooth quality.

This car can be bought at the Audi dealership in North City for 39,730 Credits.

This car can be bought at the Audi dealership for 39,730 Credits. An alternative way to obtain this car is by completing the Tourist Trophy event, in the Amateur League section.

This car can be bought at the Used Car Showroom (Late '90s) for around 46,300 Credits. The exact price of the car may vary depending on the mileage.

This car can be purchased for 71,220 Credits. It is a simplified car. 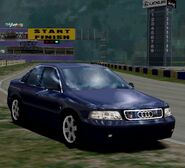 The Audi S4 '98 as it appears in Gran Turismo 2. It is shown in its Velvet Blue color scheme, available only on that game. 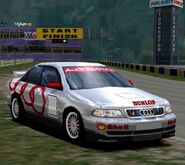 An Audi S4 '98 with racing modifications applied. The livery of which is the same as the Audi A4 BTCC. 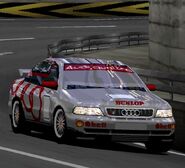 As stated above, the textures of the race modified version of the Audi S4 '98 appear to be corrupted if the car is raced on a night course.

Retrieved from "https://gran-turismo.fandom.com/wiki/Audi_S4_%2798?oldid=144259"
Community content is available under CC-BY-SA unless otherwise noted.