The Audi TT Coupe 1.8T quattro '00 is a road car produced by Audi. It appears in every main Gran Turismo game to date since Gran Turismo 2, with the exception of Gran Turismo Sport.

"This sports coupe captured the attention of all generations with its unique futuristic design."

Audi was hesitant at first in producing a compact 2+2, but when the TT concept was greeted enthusiastically at the 1995 Frankfurt Auto Show, the company went to work in making the car a reality, and the TT in 1998 bowed to a waiting public.

The exterior styling of the car was unique, featuring an arched roofline that was similar to the shape of Volkswagen's New Beetle. It was highlighted with a stately face, low-slung body and wide, aggressive stance.

The base engine was a 180-PS 1.8-liter DOHC inline-4, the same engine that powered the A3 and A4. But the choice for enthusiasts was a returned version with dual intercoolers that pumped out 222 HP. Because of the compact size of the TT, it was one of the most nimble cars in the marketplace. Built on the A3's platform, with the wheelbase shortened 3.5 inches, the TT displayed excellent cornering balance with a slight penchant for understeer. The choice for enthusiasts[2] was the all-wheel-drive version because of a more neutral tuning character, helped in part by the car's double wishbone rear suspension.

The TT's popularity was increased even more by an attractive convertible version in 2000 and the addition of a 3.2-liter DOHC V6 in 2003. With 247 HP on tap and mated to the company's revolutionary DSG twin-clutch semi automatic gearbox, the TT became the luxury 2+2 of choice for discerning enthusiasts.

This car, as the Audi TT 1.8T Quattro, can be purchased at the Audi dealership for 46,580 Credits. In addition, this car is available from the start in Arcade Mode, where it is classified as a B-Class Car.

This car can be bought at the Audi dealership for 46,580 Credits. Special colored variants of the car can be won by either getting all gold in the Tourist Trophy in Beginner League or by winning the American Championship in Amateur League. In the latter, the car has a 25% chance of being won.

This car can either be bought at the Audi New Cars Dealership for 47,700 Credits or at the Late '90s Used Car Showroom for approximately 23,850 Credits. The price may vary depending on the mileage when bought from the Used Car Showroom.

This car is a Standard car, and can occasionally be bought at the Used Car Dealership for around 43,000 Credits. The exact price of the car may vary depending on the mileage. It is a Level 1 car.

This car can be purchased for 47,700 Credits. It is a simplified car. 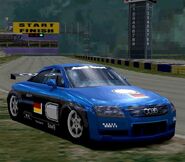 An Audi TT Coupe 1.8T quattro with racing modifications applied, battling against the Audi TT LM Edition. Apart from the different colors available and for a slightly lower rear wing, this car is practically equal to the aforementioned Audi TT LM Edition.

The Audi TT Coupe 1.8T quattro '00 as it appears in Gran Turismo 3: A-Spec. Note the license plates which read "Audi".

Retrieved from "https://gran-turismo.fandom.com/wiki/Audi_TT_Coupe_1.8T_quattro_%2700?oldid=157035"
Community content is available under CC-BY-SA unless otherwise noted.