The BMW 320Ci is a compact executive car once produced by BMW. It only appears in Gran Turismo 2.

There are fifteen colors available for this vehicle:

A sports car for grown-ups, the BMW 3-Series Coupe is a handsome yet subtle two-door evolution of the new generation 3-Series saloon. Longer, lower, and wider than the four-door, the Coupe also boasts a tweaked chassis for enhanced driving abilities. For starters the 3-Series Coupe's ride height is lowered by 15mm compared with the saloon to gain greater stability from a reduced centre of gravity. The springs and dampers are also stiffer to resist body roll. A similar independent suspension set-up to the saloon is utilised, featuring compact struts at the front and a central arm axle matched to control arms at the rear, all featuring lightweight alloy components. High technology also plays a part in taming the Coupe's rear-wheel drive power delivery. An anti-lock braking system is linked up to BMW's Cornering Braking Control to retain stability should the driver be forced to brake in the middle of a bend. An Automatic Stability Control and Traction system further acts to cut engine power if one of the wheels starts to spin, while the optional Dynamic Stability Control system uses the aid of ABS and yaw sensors to detect when the car is about to go out of control, remedying the situation automatically. Among the 3-Series Coupe line-up is the 323Ci packing a 2.5-litre inline six-cylinder engine delivering 170BHP at 5,500rpm, as well as a 328Ci boasting a 2.8-litre six giving a heftier 193BHP at 5,500rpm. The 323Ci takes just 8.0 seconds to accelerate from 0-62mph before reaching 145mph, while the 328Ci is sifter still with 0-62mph in 7.0 seconds and 150mph. Transmission choices are a five-speed close-ratio manual gearbox and a five-speed automatic with a manual-style Steptronic mode, as standard the 323Ci rolls on 16-inch alloy wheels and the 328Ci has meatier 17-inch alloys. The 3-Series Coupes were received as leaders of their class for their combination of refinement and handling abilities at their world launch in early 1999. 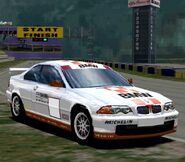 Retrieved from "https://gran-turismo.fandom.com/wiki/BMW_320Ci?oldid=144008"
Community content is available under CC-BY-SA unless otherwise noted.