The Chevrolet Camaro Z28 Coupe '97 is a Road car produced by Chevrolet. It appears in every main Gran Turismo game to date except Gran Turismo Sport.

There are ten available colors for this vehicle:

"The upper grade model of the 4th generation Camaro, reborn with various upgrades."


In 1993, the Camaro underwent a full model change and was also given an accompanying interior/exterior redesign. However, as the chassis components were essentially unchanged from the previous model, this didn't amount to much more than a large-scale minor revision. Since the Camaro was a low-cost sport model, it was difficult to fully replace the mechanical components as that would have a large impact on the price tag. Fortunately, the chassis design was solid, and reinforcement of each part delivered performance beyond expectations. Available only as a coupe when it debuted, 1994 saw the addition of a convertible to the lineup.

Two grades were available, a base model and a beefed up Z28. The engine for the base model was a 207ci OHV V6 generating 158 HP, while the Z28 received a 350ci OHV V8 that produced 285 HP. The Z28 also made news when it was announced that a new 6-speed manual transmission would become standard equipment. The Z28's 350ci engine had made its debut the year before in the C4 Corvette and it was the well-received next-generation small block, the LT1.

A new engine management computer, along with advances in catalyzer technology, meant that it could generate the type of performance expected of earlier sport models while still passing emissions tests.

In 1996 the Rally Sport package made its return as a supplementary model between the base model and the Z28. Then in 1997 the 30th Anniversary Package was announced, as the Camaro continued to polish its performance towards the 21st century.

This car can be bought at the Chevrolet dealership in South City for 22,830 Credits.

This car can be bought at the Chevrolet dealership for 22,830 Credits.

This car can be bought at the Used Car Showroom (Late '90s) for around 12,000 Credits. The exact price of the car may vary depending on the mileage.

As a Standard car, the Chevrolet Camaro Z28 Coupe '97 can be purchased from the Used Car Dealership for 17,872 Credits. It is a Level 4 car.

This car can be purchased for 24,110 Credits. It has a simple interior. 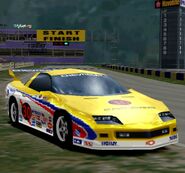 Retrieved from "https://gran-turismo.fandom.com/wiki/Chevrolet_Camaro_Z28_Coupe_%2797?oldid=134880"
Community content is available under CC-BY-SA unless otherwise noted.