The Chevrolet Corvette 427 Stingray (C3) '69 is a road car produced by Chevrolet. It only appears in Gran Turismo 2, being replaced by its two small-block counterparts in the later games of the series.

There are nine colors available for this vehicle:

When the Corvette was rebodied in 1968, the 427 engine continued as the top performance offering. But there were several different 427 V8s, ranging from powerful to truly awesome in power output. The most popular had a single 4-barrel carburetor, hydraulic lifters, and a mere 390 BHP. Another, with three two-barrel carbs, put out an even 400 BHP. And then there was a considerably more-expensive option with three two-barrels, solid lifters, and lightweight aluminum heads. So equipped, a 1968 427 Corvette weighed little more than one with the 350 cubic-inch "small block" engine, and made a staggering 435 BHP at 5800 rpm. It was street-legal, but really meant for the race track. There wasn't much soundproofing, and the driver and passenger were treated to a booming, heavy-metal symphony. The suspension was extra-stiff to cope with the engine's weight and torque, and the frame was, by today's standards, more than a little flexible. A low ride height helped the handling, but not ground clearance on steep driveways. The 1969 Corvette was one of the best handling production sports cars of its day, thanks to a fully-independent suspension. Four-wheel vented disc brakes gave it good stopping ability, too. But the 427's monstrous torque could easily overpower the bias-ply street tires of the day. For the more adventurous, well-heeled sportsman, the L88 competition option was still offered, and just enough were sold for homologation purposes. It was coyly listed as having "430" horsepower, which was a gross understatement. In any of its forms, the late 1960s 427 models were a Corvette high-water mark, with power levels not seen since.

This car can be bought at the Chevrolet dealership in South City for 52,710 Credits. 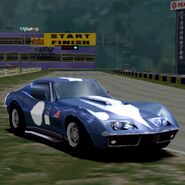 Retrieved from "https://gran-turismo.fandom.com/wiki/Chevrolet_Corvette_427_Stingray_(C3)_%2769?oldid=134887"
Community content is available under CC-BY-SA unless otherwise noted.