The Chevrolet Corvette Coupe (C4) '96 is a sports road car produced by Chevrolet. It debuted in the original Gran Turismo and has since appeared in Gran Turismo 2, being succeeded in future installments by newer or more well-known models of the Corvette.

This Corvette was introduced in 1983. Its main feature is the unmistakably sporty styling, with its distinctive long nose, and its FRP body. This car's front houses a cast iron 5.7-liter V8 OHV LT4 engine with a maximum power of 330 BHP and 340 lb ft. Suspension is double-wishbone and the front and 5-link fully independent behind. The brakes are ventilated discs on all four wheels. In 1990, GM brought out the ZR-1 which was powered by the barnstorming LT 5 engine, the first V8 4-cam 32 valve engine in an American car. This powerhouse of an engine generated 370 BHP in 1990, and after improvements in 1993, 400 BHP. This engine was in production until 1995. The dynamics capability produced by the huge 5.7 liter engine is staggering, and its acceleration is truly stirring. Its cornering is not brilliant, but it would not look out of place in drift-racing.

The player can purchase this car at the Chevrolet dealership for 36,840 Credits. Like in GT1, this car is available from the start in Arcade Mode, where is classified as an A-Class Car. 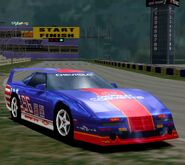 A Chevrolet Corvette Coupe (C4) '96 with racing modifications applied.
Add a photo to this gallery

Retrieved from "https://gran-turismo.fandom.com/wiki/Chevrolet_Corvette_Coupe_(C4)_%2796?oldid=134895"
Community content is available under CC-BY-SA unless otherwise noted.