4.49 kg (9.9 lb) per horsepower
The Chevrolet Corvette GRAND SPORT (C4) '96 is a Road car produced by Chevrolet. It appears in every main Gran Turismo game to date except Gran Turismo Sport.

There is only one color available for this vehicle:

After a year-long absence, the Corvette returned in 1984 with the C4 model. This model would see its performance rise as the years went on. In 1987, the Callaway Twin Turbo option was made available. Then in 1990, with the addition of option packages such as the ZR1, with its Lotus-tuned DOHC engine, the 90's Vettes recovered everything that had made them so desirable in years past.

These improvements even managed to make their way into the base model with the appearance of the LT1 in 1992, marking the proud return of a 296 HP engine as standard on Corvettes.

In 1996, the ultimate C4 went on sale against the backdrop of rumors about the next generation C5 spreading amongst Corvette fans. With the option code Z16, it took its name from the old factory racer, Corvette Grand Sport.

At the heart of the Corvette GS was the LT4 5.7L OHV V8. Based on the LT1, this motor generated a maximum output of 330 HP due to an increase in the rev limit of about 600 rpm. This was achieved with tuning that included special cylinder heads to increase compression, cam shafts, roller rockers, and a fully balanced crank shaft.

The feel of the LT4 was distinguished from the LT1 by its sharp, peaky character.

The Corvette GS had aggressive looks as well, with an exclusive metallic blue paint with racing stripes. Of the 1000 sold, 810 were coupes, and 190 convertibles. All were equipped with manual transmissions as no automatics were made available. As a side note, all non-GS manual Corvettes were also equipped with the LT4.

This car can be bought at the Chevrolet dealership for 49,250 Credits. It is also one of the playable Chevrolet cars in Arcade Mode. However, in the NTSC-J version of the game, this car isn't available from the start in Arcade Mode, and must be unlocked.

This car can be bought at the Chevrolet dealership in South City for 40,010 Credits.

This car can be bought at the Chevrolet dealership for 40,010 Credits.

This car can be bought at the Late 90's Used Car Dealership for approximately 22,950 Credits.

As a Standard car, the Chevrolet Corvette GRAND SPORT (C4) '96 can be purchased from the Used Car Dealership for 36,062 Credits. It is a Level 7 car.

This car can be bought at the Chevrolet dealership for 45,900 Credits. It has a simple interior. 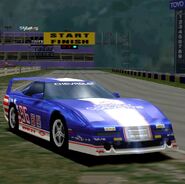 Retrieved from "https://gran-turismo.fandom.com/wiki/Chevrolet_Corvette_GRAND_SPORT_(C4)_%2796?oldid=159973"
Community content is available under CC-BY-SA unless otherwise noted.