The player can choose ten colors upon buying this car.

They called it "King of the Hill". The Corvette ZR-1 was first shown as a prototype that teased the public in 1989 and made it to the streets in 1990. It was the fastest 'Vette ever built. At its heart was the 5.7 liter LT5 V8 engine. This all-aluminium engine, with double overhead cams and four-valves per cylinder had major work done on it by the engineers at Lotus before it went to be built at Mercury Marine in Stillwater, Oklahoma. The result was a staggering 375 BHP and a stupendous turn of speed. The 1990 ZR-1 would blitz the benchmark 0-60mph sprint in just 4.9 seconds, crack the standing quarter-mile in just 13.4 seconds, registering 108 mph on the speed trap, before thundering on to 180 mph. Hauling the ZR-1 back to rest were huge 13-inch front disc brakes and 12-inch rears, whilst providing the grip were enormous ultra-low profile 315/35ZR-17 Goodyear Eagle tyres. The 'Vette's body was widened at the rear to cope with this extra rubber and the rear end also received a restyle with square tail-lights replacing the standard car's round units. The suspension, which utilized fibre-glass transverse monoleaf springs at the front and rear, was seriously beefed up as part of the deal. Not that the ZR-1 was a bargain. Tooling it up to ZR-1 spec added $25.000 to the 'Vettes price tag. By 1993 a new challenger in the form of the Dodge Viper had arrived and Chevrolet responded by upping the ante even further. The 1993 ZR-1 boasted 405 BHP making it the most powerful car in America. Despite its storming performances the ZR-1 wasn't quite the success story Chevrolet had hoped for and production stopped in 1995 after just over 6.000 were built.

This car can be purchased at the Chevrolet Dealership for 50,600 Credits. 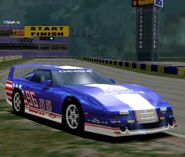 Retrieved from "https://gran-turismo.fandom.com/wiki/Chevrolet_Corvette_ZR-1_(C4)_%2795?oldid=134911"
Community content is available under CC-BY-SA unless otherwise noted.