The Citroën Saxo 1.6i VTS is a road car produced by Citroën. It only appears in Gran Turismo 2.

The name might not exude charisma, but there's no doubting that the Citroën Saxo VTS is serious fun and when it burst onto the scene back in 1997, it quite literally showed the competition a clean pair of heels. Sharing its underpinnings with the equally outrageous Peugeot 106 GTi, the Saxo's 1.6 litre 16 valve engine endows it with a 0-60 mph time of 8.6 seconds and near 125 mph top speed. The 120 BHP maximum power output kicks in at a heady 6,500 rpm, while torque is an equally impressive 108 lb/ft at 5,200 rpm. With the merest prompt of the throttle, the Saxo is eager to accelerate, pulling well from low down the rev range all the way to its red line. What's even better, is that it looks as good as it goes. Wheel arch extensions, front fog lights and a set of very chunky 6Jx14 alloy wheels turn the outside of the Saxo from dowdy runabout into serious sportster. On top of that the wheels are shod with impressively sized 185/55 R14 SX GT tyres. The Saxo's heavenly handling can be put down to its relatively sophisticated suspension set up that offers a combination of independent MacPherson struts up front and independent trailing arms at the rear. ABS equipped discs (vented on the front, solid on the back) ensure that, with a braking distance of 51 metres from 70 mph, the Saxo possesses the kind of stopping power a super car would be proud of too. Unsurprisingly the transmission is limited to a 5-speed manual box (after all, you wouldn't want an automatic spoiling your fun) while the steering is a power assisted rack and pinion set up that's both direct and quick at three turns lock to lock.

This car can be bought at the Citroën dealership for 21,330 Credits. 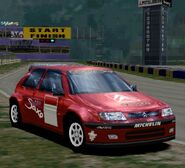 A Citroën Saxo 1.6i VTS with racing modifications applied, which literally makes this car the Citroën Saxo Rally Car. It is available in three color schemes: Red, Green, and Blue.

Retrieved from "https://gran-turismo.fandom.com/wiki/Citro%C3%ABn_Saxo_1.6i_VTS?oldid=134947"
Community content is available under CC-BY-SA unless otherwise noted.