The Daihatsu Cuore TR-XX (J) '90 (also called the Daihatsu Mira TR-XX (J) '90 in Japan and the U.S.) is a Road car produced by Daihatsu. It only appears in Gran Turismo 2, being replaced by its 1997 TR-XX Avanzato R trim equivalent in the later games of the series.

The diminutive Daihatsu Mira first took Tokyo by storm in 1980. By 1990 it had reached its third generation. Changes in Japanese light body car regulations allowed it to grow in length by 100mm and have its engine enlarged to a mighty 600cc. Safety was improved with the introduction of side-impact reinforcement[1] in the doors. Standard Miras made do with a three-cylinder single overhead cam engine of 55BHP but the mightiest Mira - the TR-XX - added a few tricks. The engine was fuel-injected and turbocharged to give it the maximum allowable 64BHP at a screaming 7,500rpm and a maximum torque figure of 68 lb/ft at 4,000rpm. With a choice of five-speed manual or three-speed automatic transmission and four-wheel drive to lay the power down, the Mira TR-XX was one of Japan's first pocket rockets. The suspension mated front struts with semi-trailing arms at the rear end. Not exactly over endowed with grip from its skinny tyres, the Mira was nonetheless a fun car to drive thanks to its light weight and compact size. Darting through city traffic rather than tackling tortuous country roads or high-speed motorway runs was its forte. Providing stopping power were vented front discs with drums for the rear wheels. To emphasise the sporting nature of the Mira TR-XX, Daihatsu enhanced the boxy styling with chunky spoilers front and rear and a set of nifty alloy wheels, whilst the interior received an upgrade in seats and trim to complete the picture. The tiny tearaway would never be able to match grown up street racers like the Skyline or Mitsubishi Evo in a straight race, but in a battle for a parking space on the congested streets of Japan, the miniscule Mira was the ultimate weapon.

This car can be bought at the Daihatsu Used Cars dealership for around 3,000 Credits. 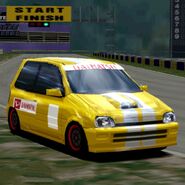 Retrieved from "https://gran-turismo.fandom.com/wiki/Daihatsu_Cuore_TR-XX_(J)_%2790?oldid=139619"
Community content is available under CC-BY-SA unless otherwise noted.