The Daihatsu Cuore TR-XX Avanzato R (J) '97 is a Road car produced by Daihatsu. It first appears in Gran Turismo 3: A-Spec, and has returned in every main game since, with the exception of Gran Turismo Sport.

The player can choose just three colors when they buy this car:

"One of the leaders of the high-powered Kei trend, which showed its superior performance on mountain roads." 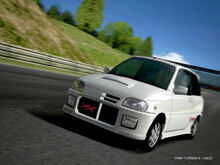 In 1994, the power competition between K-cars had reached its peak. Daihatsu's answer to Suzuki's best selling Alto series was the Mira TR-XX Avanzato. The Avanzato was a sports grade trim that was added to the previous Mira line-up in 1991, and the Avanzato R is a stoic model with additional features that improve its driving performance.

Japan's bubble economy had already collapsed by this time, but the car market was still full of high-end customers. Although the new Avanzato was a 659 cc K-car, it differentiated itself from the Alto Works by equipping an engine similar to a full size car; an inline-4, DOHC 16 valve turbo. The Avanzato R also had a maximum torque of 73.7 lb-ft, and was the first K-car to push output over the 70 lb-ft mark.

Even the transmission was given a luxurious choice of a 5-speed manual or 4-speed automatic. The rear suspension had a toe-control arm for the first time in a K-car, and combined with the standard LSD, it was capable of extremely sharp cornering. All models now came equipped with disc brakes in the rear.

The speed of the Avanzato R was apparent on winding roads. 1st, 2nd, and even 3rd gear would rev up immediately, and aside from very severe tight corners, it was possible to clear most corners in 4th gear. Though with this much performance, the engine cooling was pushed to its very limits, and after a hard run it required a cool down period.

Interestingly, a month after the sale of the Avanzato R, the rival Alto Works also underwent a full model change. This was a fun era when high-power K-cars competed neck and neck to be the best.

This car can be bought at the Daihatsu dealership for 11,140 Credits. It can also be won by getting all Gold in Race of Turbo Sports in the Beginner League. But this is only possible the PAL version of the game.

This car can be bought at the Used Car Showroom (Late '90s) for around 5,500 Credits. The exact price of the car may vary depending on the mileage. Like in GT3, this is only possible in the PAL version of the game.

As a Standard car, the Daihatsu Cuore TR-XX Avanzato R (J) '97 can be purchased from the Used Car Dealership for 9,082 Credits. It is a Level 0 car.

This car can be purchased for 11,140 Credits. It is a simplified car.

Retrieved from "https://gran-turismo.fandom.com/wiki/Daihatsu_Cuore_TR-XX_Avanzato_R_(J)_%2797?oldid=143667"
Community content is available under CC-BY-SA unless otherwise noted.