The Daihatsu Cuore TR (AeroPackage,J) '98 (also called the Daihatsu Mira TR (4WD,J) '98 in Japan and the U.S.) is a Road car produced by Daihatsu. It only appears in Gran Turismo 2, being replaced by its 1997 TR-XX Avanzato R trim equivalent in the later games of the series.

1997 was the last year for Daihatsu's fourth generation Mira. Launched in in 1994 it came in three and five-door bodies and with the choice of two or four-wheel drive. Under the stubby bonnet was a three-cylinder double overhead cam engine with 55BHP up for grabs at 7,000 rpm. Opt for the four-wheel drive version though, and you'd get a whole 3 lb/ft more torque, bringing the total to 55 lb/ft at 4,000rpm. You would also get a five-link rear suspension in place of the semi-trailing arms of the two-wheel drive Mira. Front suspension was MacPherson strut and disc brakes were fitted up front to call things to a halt. A year later the Mira was completely revised. A larger, softer, more rounded - and much stronger - body was fitted. The quirky Mira Gino even featured a retro-look front end that made it resemble the supercool Mini Cooper. At the top of the Mira food chain there's the TR. Fitted with a three-cylinder 660cc TOPAZ engine boasting a turbocharger and 64BHP at 6,400rpm it's the meanest model made. With full-time four-wheel drive and the choice of five-speed manual or four-speed automatic transmissions the TR has no trouble getting its power down. Handling is enhanced over previous models with the introduction of a torsion beam rear suspension to go along with the front MacPherson struts. To cope with the extra power the front brakes are upgraded to vented discs, though the rear wheels still make do with drums. The bigger-bodied Mira now offers much improved interior space and refinement. That may give you the impression that the Mira has grown up, but thanks to the chassis and engine enhancements, it's still full of youthful exuberance when it comes to the driving experience.

This car can be bought at the Daihatsu New Cars dealership for 11,130 Credits. 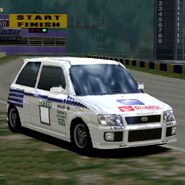 Retrieved from "https://gran-turismo.fandom.com/wiki/Daihatsu_Cuore_TR_(AeroPackage,J)_%2798?oldid=139623"
Community content is available under CC-BY-SA unless otherwise noted.