The Daihatsu Cuore TX (4WD,J) '98 (called the Daihatsu Mira TX (4WD,J) '98 in Japan and the U.S.) is a Road car produced by Daihatsu. It only appears in Gran Turismo 2, being replaced by its 1997 TR-XX Avanzato R trim equivalent in the later games of the series.

This is the 5th generation Mira, launched after a full model change in response to the new Japanese "kei" car regulations introduced in 1998. This model saw great changes to the standard "kei" car Mira, including the adoption of impact-safe body "TAF" and completely redesigned 660cc in-line 3-cylinder "TOPAZ" engine. The engine mounted in the 3-door top grade model, the TR, is the top performance "TOPAZ" turbocharged in-line 3-cylinder DOHC unit. This generates a maximum power output of 64ps/6,400rpm and maximum torque of 10.9kgm/3,600rpm. Two types of transmissions are available, a 5-speed MT and 4-speed AT, and the drivetrain is a full-time 4WD type. The suspension features MacPherson struts on the front, with torsion beam fitted rear trailing arms on the rear, large diameter ventilated disc brakes are used on the front wheels and leading/trailing type on the rear. Although the car weighs 790 kg, the combination of sports-oriented engine and chassis overcame any weight concerns. The best result of the introduction of the new regulations was the acquisition of a bigger body than previous models. This is fully utilised in the TR with its long roof line, and by using a design with minimised slant on the front windscreen, it has successfully achieved a cabin space with a really spacious feeling.

This car can be bought at the Daihatsu New Cars dealership for 9,720 Credits. 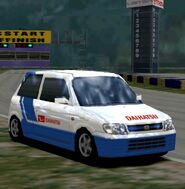 Retrieved from "https://gran-turismo.fandom.com/wiki/Daihatsu_Cuore_TX_(4WD,J)_%2798?oldid=139621"
Community content is available under CC-BY-SA unless otherwise noted.