After the Move's original appearance in 1995, October 1998 saw a complete makeover for Daihatsu's compact people carrier to go along with a change in regulations for Japanese light body cars. This latest generation Move features slightly more rounded styling and revised rear suspension now incorporating a more sophisticated torsion beam system. Once again the top model in the standard range is the sporty Move SR-XX. Now, though both, two and four-wheel drive versions use the same three-cylinder DOHC turbo engine with 64BHP at 6,000rpm. This engine now features variable valve timing and is mated to wither a five-speed manual or four-speed auto gearbox. The brakes are uprated to include vented discs at the front and the steering has been revised to give a more direct response than the previous model. The new range also features a line-up of special Custom models, the meatiest of which is the Aerodown Custom. Its biggest difference is the all-new TOPAZ four-cylinder variable valve timing DOHC turbo engine - once again with 64BHP at 6,000rpm which is the maximum allowable in the class. A four-speed column-shift automatic transmission is standard. There are no other major mechanical changes but the Aerodown Custom - as the name suggests - features some heavily customised aerodynamic bodywork additions. A chunky front air dam houses no less than four round headlamps making the Move look like it's just come off a night stage in the Safari Rally. The rear lights are also given a stylish redesign. Custom roof rails and alloy wheels are added and the ride height is dropped 20mm to enhance the sporty look. The result is the meanest Move on the streets of Tokyo, but sadly, although lesser models are exported, the Aerodown Custom is one for Japan only.

The player can find and purchase this car at the Daihatsu New Cars Dealership for 13,800 Credits. It is also one of the playable Class-C cars in Arcade Mode. 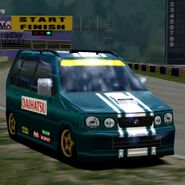 A Daihatsu MOVE Custom Aero Down '98 with racing modifications applied.

Retrieved from "https://gran-turismo.fandom.com/wiki/Daihatsu_MOVE_Custom_Aero_Down_%2798?oldid=145748"
Community content is available under CC-BY-SA unless otherwise noted.