The Daihatsu MOVE SR-XX 4WD '97 is a Road car produced by Daihatsu. It first appears in Gran Turismo 2 and has returned in every main game since then, except for Gran Turismo 3: A-Spec and Gran Turismo Sport.

"The top grade, 4-cylinder Turbo model of the Move; now with better product value to take on its competitors."

Daihatsu created the Move to do one thing: to topple Suzuki's Wagon R from the K-car pedestal. Because Daihatsu introduced the Move at the height of the Wagon R's popularity, the company needed to show the Japanese public that the Move was more special. One way of doing this was giving the Move four doors from the outset (the first-generation Wagon R came as a 3-door with no driver's side rear door). Another added plus was allowing the rear hatch to open and close sideways so it can function in tight spaces, as opposed to the door swinging up like in the Wagon R.

The base Move came with a 51 HP inline-3, while the next grade up got a 54 HP fuel-injected three cylinder. The top-of-the-line version, the CR, came powered by a 63 HP turbocharged DOHC inline-4 mated to a 5-speed manual transmission or 4-speed automatic. The CR came as an FF (Front engine, Front drive) or F/AWD (Front engine/All Wheel Drive).

Suzuki countered the Move in 1997 by spicing up the Wagon R. Daihatsu, in turn, countered with the Move+, a radical version of the Move, with a flashy oversized front grille and "Aerodown Custom" look that included a lowered body. The Move+ was such a hit with the young crowd that Suzuki released a similar trim level with the Wagon R not much later.

This car can be bought at the Daihatsu Used Cars Dealership in East City for around 8,500 Credits.

This car can be bought at the Used Car Showroom (Late '90s) for around 6,300 Credits. The exact price of the car may vary depending on the mileage.

As a Standard car, the Daihatsu MOVE SR-XX 4WD '97 can be purchased from the Used Car Dealership for 10,237 Credits. Alternatively, it can be acquired by winning the Lightweight K Cup in B-Spec. It is a Level 0 car.

This car can be purchased for 12,590 Credits. It is a simplified car. 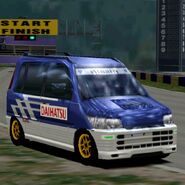 Retrieved from "https://gran-turismo.fandom.com/wiki/Daihatsu_MOVE_SR-XX_4WD_%2797?oldid=143673"
Community content is available under CC-BY-SA unless otherwise noted.