The Daihatsu MOVE SR-XX 4WD '98 is a road car produced by Daihatsu. It only appears in Gran Turismo 2, being overshadowed by its 1997 equivalent.

The Move put an end to the market dominance of the Wagon R, considered the car that ignited the light minivan market. Latecomer that it was, the Move had the significant advantage of being able to learn from its rivals' mistakes. This second-generation Move came in the wake of a full model change that took advantage of the government's new subcompact standards, which went into effect in October 1998. The SR-XX represents the top-of-the-line of this new wave of Move models. Stressing sporty handling and driver-friendliness, this is the only turbocharged model in the series. The hood's gaping air scoop bespeaks the sporty ride that awaits. The in-line 3-cylinder DOHC turbocharged engine, equipped with a new variable valve timing mechanism, delivers a maximum output of 63 BHP at 6,000 rpm and a maximum torque of 79 lb-ft at 3,200 rpm to edge out rival Wagon R-RR. The front-engine, front-wheel drive system is available with a 5-speed manual or 4-speed automatic transmission. The chassis combines MacPherson strut front suspension and torsion beam rear suspension with ventilated disc front brakes and rear drum brakes. The heavyish weight does not excessively hamper the car's powerful performance.

This car can be bought at the Daihatsu New Cars Dealership in East City for 12,650 Credits. 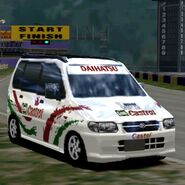 Retrieved from "https://gran-turismo.fandom.com/wiki/Daihatsu_MOVE_SR-XX_4WD_%2798?oldid=134985"
Community content is available under CC-BY-SA unless otherwise noted.