The Daihatsu Opti Club Sport (2WD,J) '97 is a Road car produced by Daihatsu. It so far appeared only in Gran Turismo 2.

The first-generation Opti came out in 1992 as a basic subcompact targeting women drivers. The Opti has since branched into many variations, such as the 1996 retro-flavored Opti Classic and this model, the sporty Club Sport, styled after the Club Racer and released in August 1997. Although available with either front-wheel or all-wheel drive, the Club Sport comes in only one body type: 3-door. Using the same basic components as the Mira, both the front-wheel and all-wheel-drive models house an inline 3-cylinder DOHC engine that generates a maximum output of 54 BHP at 7,500 rpm and a maximum torque of 45 lb-ft at 4,000 rpm. The front-wheel-drive model comes with a 5-speed manual or 4-speed automatic transmission; the all-wheel-drive model, with a 5-speed manual or 3-speed automatic transmission. Suspension differs somewhat between drive systems. Both feature MacPherson strut front suspension, but the front-wheel-drive model uses semi-trailing arm rear suspension, and the all-wheel-drive model features 5-link rear suspension. Both have front disc brakes and drum rear brakes. True to its name, the Club Sport features an exterior resembling Europe's Hot Hatches and further enhanced by such details as an antenna mounted in the roof's center. The car's peppy performance lives up to the exterior's promise. 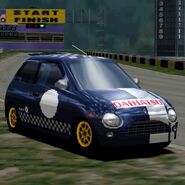 Retrieved from "https://gran-turismo.fandom.com/wiki/Daihatsu_Opti_Club_Sport_(2WD,J)_%2797?oldid=148567"
Community content is available under CC-BY-SA unless otherwise noted.