The Daihatsu Opti Club Sport (4WD,J) '97 is a Road car produced by Daihatsu. It so far appeared only in Gran Turismo 2.

Take one full-on World Rally Car, leave it in the tumble dryer for rather too long and what have you got? The manic yet miniature Daihatsu Opti Club Sport.[1] The Daihatsu Opti model range was originally introduced in 1992 and updated with a retro-style chrome-smothered Opti Classic model in 1996. The tiny hatchback finally developed a wild streak for the 1997 model year, with the addition of the trendy Opti Club Sport.[1] The choices don't end there. This three-door Opti Club Sport[1] can be picked with either front-wheel drive or grippy four-wheel-drive chassis layouts. Both versions are powered - if that's the word - by a suitably compact in-line 12-valve three-cylinder engine. If revved hard enough, this manages to squeeze out a modest 55 BHP maximum power at a frothy 7,500 rpm. The Opti options continue with a five-speed manual transmission or a four-speed automatic in the front-wheel drive car, or a choice of five-speed manual or three-speed auto shifters in the four-wheel drive Opti Club Sport.[1] Suspension is set up to match the racy looks, using MacPherson struts at the front end and either semi-trailing arms in the two-wheel drive car or a five-link arrangement in the all-wheel-driven version. The four-wheel drive system itself is permanent and provides excellent all-wheater traction while also avoiding the intrusive effects on the car's steering that can be a characteristic of front-wheel drive models. Stick to the road however isn't enormous, laid on by tiddly lightweight wheels wearing low-profile tyres. Braking, meanwhile, is left up to solid discs at the front end. A big antenna poking out the centre of the roof only makes this fully accessorised Opti look even more like an enlarged remote control car. The big shame is that all the amusement provided by the Daihatsu Opti Club Sport[1] is only available to Japanese urban rallyists, the model only having been sold in its home market. 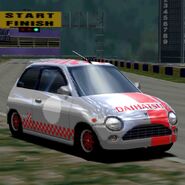 Retrieved from "https://gran-turismo.fandom.com/wiki/Daihatsu_Opti_Club_Sport_(4WD,J)_%2797?oldid=134991"
Community content is available under CC-BY-SA unless otherwise noted.