"The compact FF hatchback with a great layout offering a roomy interior."

As the successor to the popular Charade, the Storia had big shoes to fill when it went on sale in the spring of 1998. Although this front-wheel-drive hatchback was also marketed by Toyota as the Duet (Toyota owns Daihatsu), the car's development and engineering were completely performed by the exclusive small-car maker.

At the heart of the Storia was a 1.0-liter DOHC inline-3, the same engine that powered the third-generation Charade. This fuel-injected three-cylinder produced 59 HP and 69.4 lb-ft of torque. In 2000, a new 1.3-liter DOHC inline-4 made its appearance, upping power output to 89 HP. The engine came mated to either a 5-speed manual or 4-speed automatic, both of which were newly developed, and sent power to either the front or all four wheels. The CX trim level boasted such luxurious amenities as a leather-covered steering wheel and wood-paneled interior trim. In 2003, the 1.0-liter engine was dropped from the equipment list.

The hottest of all Storias, the unforgettable X4 (Cross Four) was virtually race-ready, powered by a 713-cc DOHC inline-4 that cranked out an astounding 118 HP. It featured a number of racing novelties such as a close-ratio transmission, front and rear mechanical LSD, and forged crankshaft and pistons. It was definitely rally-ready, and it proved it by dominating Japan's under-1000cc class rally events.

This car can be bought at the Daihatsu New Cars Dealership for 10,380 Credits. Racing Modifications for this car cost 80,000 Credits.

This car can be bought at the Late '90s Used Car Showroom for around 6,746 Credits. Prices may vary based on the mileage.

As a Standard car, the Daihatsu STORIA CX 2WD '98 can be purchased from the Used Car Dealership for approximately 8,606 Credits. It is a Level 0 car.

This car can be purchased for 10,380 Credits. It is a simplified car. 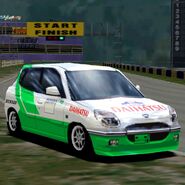 Retrieved from "https://gran-turismo.fandom.com/wiki/Daihatsu_STORIA_CX_2WD_%2798?oldid=145831"
Community content is available under CC-BY-SA unless otherwise noted.