The Dodge Intrepid ES is a Road car produced by Dodge. It only appears in Gran Turismo 2.

Although its name suggest otherwise, the Dodge Intrepid is basically a large, but tame family saloon car, unless it's got an ES badge on its flank that is. The ES is the performance flagship of the Intrepid range and is designed to appeal to the hard charging driver. Those two letters on the boot mean there's a great big dollop of power to be had and it all comes courtesy of a 3.2 litre all aluminium engine under the bonnet. The 24 valve V6 engine develops a more than healthy 226 BHP at 6,300 rpm and it's enough to get the Intrepid from 0-60 mph in around 8 seconds. Top speed meanwhile is of licence losing proportions. Dodge engineers have paid the same attention to detail with the suspension as they have with the engine. The Intrepid boasts fully independent suspension, specifically designed to decrease front end lift on acceleration and front end dive under braking. In addition to that a link type rear stabiliser bar helps tune handling characteristics. As if that wasn't enough, the torsional stiffness of the whole chassis has been increased by 37 per cent compared to the previous model. The Intrepid also boasts power assisted rack and pinion steering and an Autostick transmission system which allows the driver to choose between automatic and manual shift. A four wheel ABS braking system means stopping distances are kept to a minimum, while the Intrepid's low speed traction control system ensures quick getaways are easily attainable. Thanks to its 108 inch wheelbase and wheel at each corner stance, the Intrepid boasts the same cab forward look as the current crop of large American cars. It's performance credentials are marked out by the large 16 inch forged aluminium wheels it sits on however.

The player can purchase this car at the Dodge dealership for 24,660 Credits. 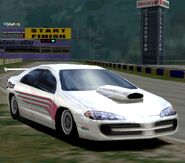 Retrieved from "https://gran-turismo.fandom.com/wiki/Dodge_Intrepid_ES?oldid=142539"
Community content is available under CC-BY-SA unless otherwise noted.