The Dodge Neon ACR is a road car produced by Dodge. It only appears in Gran Turismo 2, being replaced by the Neon SRT4 in later games from Gran Turismo 4 onwards.

There are nine colors available for this vehicle:

The Dodge Neon was launched to the American public on a wave of publicity back in 1994 as a replacement for Chrysler's aging compact saloons. It certainly turned heads too. Its stylish cab forward design was off set perfectly by its rounded front headlights and it found immediate approval with the twenty-somethings it was aimed at. There was one thing missing however - a performance version. It wasn't long before Dodge realised the potential for performance and came up with two models; the Neon R/T (Rapid Transit) and the Neon ACR (American Club Racer). Despite their sporty connotations, both cars come with the same two-litre engine that can be found in the standard Neon. The four-cylinder 16-valve develops 131BHP which might not sound like much, but provides it with enough oomph to get from 0-60mph in 9.3 seconds and on to a top speed of 120mph. For speed freaks there's the option of a double-overhead cam version of the same engine. Power is boosted to 150BHP and with the aid of a five-speed manual gearchange, the sprint to 60mph takes just 7.6 seconds. Whichever engine you go for, its the kind of performance that allows the Neon to see off most of the cars in its class. Both R/T and ACR will see the competition off on a twisty race track too. Both cars come with a wealth of performance enhancements including quick-ratio steering, alloy wheels, ABS-equipped disc brakes all round and even high performance tyres. The independent MacPherson strut suspension also benefits from a firmer set up to enhance cornering further. For the finishing touch, R/T models come with a traditional American body stripe running from bonnet to boot - just like the old R/T muscle cars used to get.

This car can be bought at the Dodge dealership for 14,860 Credits. 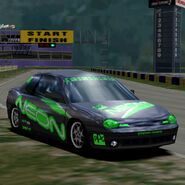 Retrieved from "https://gran-turismo.fandom.com/wiki/Dodge_Neon_ACR?oldid=135029"
Community content is available under CC-BY-SA unless otherwise noted.