The Chrysler Viper GTS-R is a front engined, rear-wheel drive racing car built by American manufacturer Chrysler, in conjunction with French racing team Oreca and Britain's Reynard Motorsport between 1995 and 2005. It was built for several endurance race events in the late nineties, including the 24 Hours of Le Mans and Nürburgring 24 Hours. It was very successful in these events, winning the following races/series: 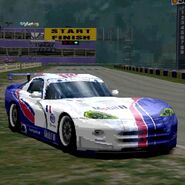 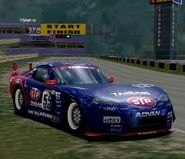 Retrieved from "https://gran-turismo.fandom.com/wiki/Dodge_Viper_GTS-R?oldid=135035"
Community content is available under CC-BY-SA unless otherwise noted.