The Viper RT/10 is a sports road car produced by Dodge, which is a convertible model of the more widely known Dodge Viper GTS. It only appears in the first two games of the series.

At its heart, Dodge Viper is a thoroughly American sports car driven by an awesome V10 engine. Its adrenaline pumping performance and wholly unique look represent the ultimate prize for those with a true passion for automobiles. It is the conclusive expression of the Dodge "attitude". The Viper GTS Coupe and RT/10 Roadster are powered by the same awesome 488 cu in V10 engine; that power is channeled by a high-performance six-speed gearbox; Viper rides on a classic race-bred sports car chassis and suspension, massive high-performance tires, and heavy-duty brakes. Viper is about driving, about the pure enjoyment of getting from point A to point B. There exists only the driver, the car and the road. Everything else is irrelevant. Viper is designed primarily to become a part of its environment - in the open air, with the air in your face, or on a busy street, filled with people, cars, sights and sounds.

The Viper RT/10 can be purchased from the Dodge Dealership for 68,800 Credits. It is also one of the playable Dodge cars in Arcade Mode, but the car is not available from the start, it must be unlocked.

This car can be purchased at the Dodge dealership for 72,790 Credits.

The Dodge Viper RT/10 as it appears in the original Gran Turismo. In this picture is displayed the Blue with painted White Stripes color scheme, only available in that game. 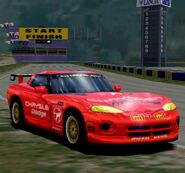 A Dodge Viper RT/10 with racing modifications applied. With the Red color scheme, the car appears to resemble the #40, driven by René Arnoux, Justin Bell, and Bertrand Balas, who finished the 1994 24 Hours of Le Mans in 3rd place in the GT1 class (and 12th place overall).

Retrieved from "https://gran-turismo.fandom.com/wiki/Dodge_Viper_RT/10?oldid=144357"
Community content is available under CC-BY-SA unless otherwise noted.