The Fiat 500 R '75 is a road car produced by Fiat. It only appears in Gran Turismo 2, being replaced by its 1972 equivalent in later games.

There are ten colors available for this vehicle, they are unnamed in-game:

The tiny Fiat 500 first hit the showrooms back in 1957 and was hailed as the car that would bring motoring to the masses in Italy. The appeal was easy to see. The 500 was a utilitarian four-seater that possessed kart-like handling, if not kart-like performance. It was also just about the cheapest way to get mobile at the time. Original power was a 479cc flat twin air cooled engine mounted in the rear. This was later boosted to 499 cc with power now up to 18 BHP. Given its distinct lack of power, the 500 was no performance demon. Fortunately for those who loved its looks, but wanted something a bit faster, the high performance Abarth version arrived in 1963. Carlo Abarth established his tuning company in Turin in 1949 and it wasn't long before he'd turned his hand to extracting more power from Fiat's baby. The resultant increase in performance was stunning. Abarth managed to more than double the power output of the engine - the fastest SS versions delivered more than 40 BHP. Maximum speed was now up to over 90 mph, and that was at a time when many sports cars could barely crack the 100 mph mark. Unsurprisingly, the 500's basic independent suspension was heavily modified, and the car also benefited from bigger brakes and tires. It even had flared wheel arches. The 500 Abarth was one of the forerunners of the modern hot hatch. 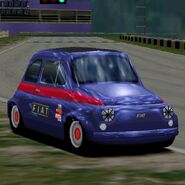 Retrieved from "https://gran-turismo.fandom.com/wiki/Fiat_500_R_%2775?oldid=158720"
Community content is available under CC-BY-SA unless otherwise noted.