The Ford Focus Rally Car '99 is a rally car produced by Ford. It appears in every main Gran Turismo game to date since Gran Turismo 2, with the exception of Gran Turismo Sport.

As the car doesn't show a driver number and lacks the distinctive Martini livery, the car is not based on an actual competitor, but rather the 1999 pre-season Test Car, driven by Colin McRae, Petter Solberg and Simon Jean-Joseph prior to the 1999 WRC season.

Only one[1] color is available for this car:

"Driven by famous drivers like Colin McRae. Its allure will never fade away."

Ford, a longtime participant in the World Rally Championship, had for the better part of the 1990s always competed with its Escort model. But on the cusp of a new millennium, the company introduced an all-new race car with the 1999 season, the Ford Focus, a vehicle that in just a few short years would, for a time, claim the title as the world's best-selling passenger car.

Its engine was mounted transversely, just like in the production car, but its Xtrac transmission was placed longitudinally in an effort to try to improve upon the vehicle's weight distribution. Ford's main rival at the time in the WRC, Peugeot, also employed a similar layout in their 206. In comparison to the French car, the structural rigidity of the Focus far surpassed that of its rival.

Ford also had a stellar driver lineup: legendary rally driver Colin McRae was on the cars, as were Petter Solberg, Thomas Radstrom, and Simon Jean-Joseph.

In its racing debut, the Focus's water pump was found to be in violation of the regulations. But despite having to undergo hurried modifications, it proved highly competitive from Day One. McRae made steady progress by leveraging his and the car's strengths, and the Focus WRC machine scored its first victory in the third stop of the season, the challenging Safari Rally, and went on to win the next race as well at the Portugal Rally.

The player can purchase this car in the special section of the Ford dealership for 500,000 Credits. In addition, this car is one of the rally cars that are available from the start in Arcade Mode.

This car can be purchased at the Ford dealership for 350,000 Credits. Alternatively, it can be acquired by winning the Smokey Mountain Rally event.

The player can unlock this car by completing the lesson #17 in the Driving School area.

This car can be bought at the New Ford dealership for 750,000 Credits.

This car can be purchased for 250,000 Credits. It is a simplified car. 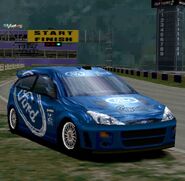 The Ford Focus Rally Car '99 as it appears in Gran Turismo 2. In this picture is displayed the Blue color scheme, available only in that game. The car also incorrectly features a moonroof, which was removed in later games.

The Ford Focus Rally Car '99 as it appears in Gran Turismo 3: A-Spec. As stated above, the small Valvoline logos on the doors were reinstated on the car. However, starting from Gran Turismo 4, said logos were once again removed.

Retrieved from "https://gran-turismo.fandom.com/wiki/Ford_Focus_Rally_Car_%2799?oldid=151403"
Community content is available under CC-BY-SA unless otherwise noted.