There are seven available colors for this vehicle in Gran Turismo 2 and Gran Turismo 3: A-Spec, they are unnamed in both games:

There is only one available color in Gran Turismo 6 and Gran Turismo Sport onwards. Like in the previous games, it is still unnamed:

"A much-desired Le Mans victory and an incredible 1-2-3 finish: a historic machine that opened the first pages of the legend."

In 1963, Ford attempted to buy Ferrari in order to improve their brand image through racing. Though the talks did not go well and the buyout did not happen, Ford then decided to collaborate with the UK race constructor Lola Cars, to whom they had been providing engines, and together they initiated a plan to develop a brand new racing car.

In 1964, based on the racing sportscar designed by Lola, the Mark I was completed, and was named the Ford GT. The commonly known name of 'GT40' was a nickname given by a reporter who was surprised by the 40 inch total height of the car.

A lightweight, aerodynamic body made of fibreglass was mounted on a steel monocoque chassis. This was combined with an all-aluminium 4.7 L V8 OHV engine, mounted amidship. The car debuted at the 1964 Nürburgring 1,000.0 km, and later, in the Le Mans 24-hour race of the same year, three Mark Is entered the competition. At the Le Mans it showed incredible speed, setting the lap record and achieving the first over 300 km/h run in Le Mans history, but it did not produce any results due to reliability issues.

From 1965 they commissioned their race activities to the famous Shelby American, and though they set the fastest lap record and the top speed record again at the 24 Hours of Le Mans, all cars retired out of the race once more.

In the 1966 Le Mans 24-hour race, out of the 13 Ford GTs in the race, 8 were the advanced Mark IIs, with an improved chassis and a Shelby-made 7 L OHV V8. In addition to many other refinements, the power of the engine was improved from 345 BHP to 468 BHP.

Henry Ford II himself visited the circuit to watch the race, and Ford not only achieved their much sought after victory, they dominated the podium in an incredible 1-2-3 position win. From this year until 1969, the Ford GT would go on to win the Le Mans 4 years in a row.

It can be purchased in the special section of the Ford dealership for 500,000 Credits.

It can only be obtained from winning the Gran Turismo All Stars event, in the Amateur League section. It has a 1/4 chance (25% probability) to be won.

It can be purchased in the Ford dealership for 2,800,000 Credits and has a detailed interior. Due to the presence of other models of the Ford GT40, the name of this car was changed into Ford GT40 Mark I '66, in order to avoid confusion. A special 15th Anniversary version of the car is also available by pre-ordering the game on the Gran Turismo official website.

This car can be purchased in the Ford section of Brand Central for 2,800,000 Credits. 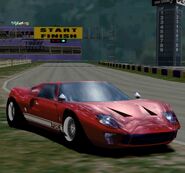 The Ford GT40 Mark I '66 as it appears in Gran Turismo 2. Originally more color options were available for this car in earlier games, such as the White color shown in this picture

The Ford GT40 Mark I '66 as it appears in Gran Turismo 6. Unlike previous games, it is now only available in Red, while the "Avon" tyre branding and the "Ford" lettering on the front were both removed 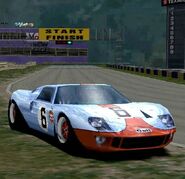 The incomplete and unused racing modification for the Ford GT40 '66 in Gran Turismo 2. The car looks identical to the GT40 Race Car, which became a fully separate car in the final version of the game

GT Sport Firestone/Gulf livery. The livery is based on the GT40 Race Car
Add a photo to this gallery

Retrieved from "https://gran-turismo.fandom.com/wiki/Ford_GT40_%2766?oldid=157496"
Community content is available under CC-BY-SA unless otherwise noted.