The Ford GT40 Race Car '69 is a Race car produced by Ford, it appears in every main Gran Turismo game to date since Gran Turismo 2, with the exception of Gran Turismo Sport. The car appears to be the #6 Le Mans winning 1969 GT40, driven by Jacky Ickx and Jackie Oliver.

In 1963, Ford set out to conquer the World Endurance Championship. In the beginning, the company even thought about acquiring Ferrari to realize its goal, but ultimately, it obtained the rights to manufacture the Lola GT, made by the up-and-coming race car constructor, Lola. This marked the beginning of the Ford GT, a car that would eventually alter racing history.

The soon-to-be famous race car utilized a twin-tube monocoque chassis, considered cutting-edge technology at the time. The front and rear suspension consisted of parallel double wishbones, the same as a formula racer. The engine, based on the company's new 289 cu.-in. V-8, had its power increased to 375 HP.

This first-generation Ford GT, called the Mark I, was originally slated to run in the FIA GT prototype category. This class was later changed to the Group 6. The car was nicknamed the GT40 because its overall height, from the ground to its roof, measured only 40 in.

The 7.0-liter Mark II and the Mark IV that followed also ran in the Group 6 category. But in 1968, the FIA limited Group 6 displacement to 3.0 liters, which disallowed the Mark II and Mark IV from contesting in this class. That said, a Group 4 category was created, where if a 25-car production quota was met, cars with engine displacements up to 5.0 liters were allowed. The Ford GT40 raced in this category in the World Championships.

This car can be won by winning the third race of the MR Challenge, located on Red Rock Valley Speedway.

This car can be obtained from the Gran Turismo World Championship, in the Professional League. It has a 1/4 chance (25% probability) to be won. It is not available for purchase at the dealership.

This car can be won from the Laguna Seca Endurance. Like in GT3, this car is not available for purchase at the Ford dealership.

This car can be purchased for 2,000,000 Credits. This game would also mark the first time said car is purchasable.

This car can be won from the B-Spec Indianapolis 500. As a Standard car, it can be obtained occasionally from the Used Car Dealership at a price of around 20,000,000 Credits. It is a Level 17 car.

The Ford GT40 Race Car '69 as it appears in Gran Turismo 2. Originally the car lacked all of its sponsors, apart from the Gulf logos. Additionally, the position of the Gulf logos on the car is quite different compared to that of Gran Turismo 4 and onwards.

The Ford GT40 Race Car '69 as it appears in Gran Turismo 3: A-Spec. Apart from the addition of tire branding, the car remained the same as in GT2. As stated above, the car originally had "AVON" tire branding in this game, which was replaced with "Firestone" tire branding in subsequent games.

The older vehicle banner as left over in the game files of Gran Turismo 2, incorrectly naming the car as the Mark III Race Car.
Add a photo to this gallery 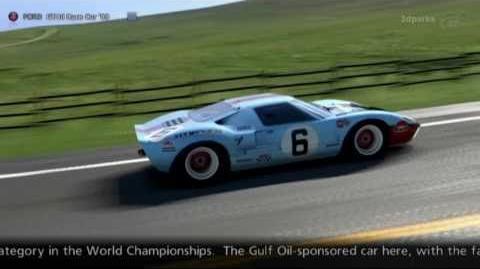