The Ford Mondeo Ghia X 2.5i 24V is a Road car produced by Ford. It so far appeared only in Gran Turismo 2.

The player can choose ten colors upon buying this car:

When the Mondeo took over the reigns from Ford's jelly-mould Sierra in 1993 it was widely acclaimed as being one of the finest-handling front-wheel drive saloons around - thanks in no mean measure to the involvement of Formula One World Champion Jackie Stewart in its chassis setup. Launched with a range of engines from 1.6 to two litres in capacity it was a year later before the performance flagship 24-valve 2.5-litre V6 arrived. The whole range received a facelift in 1996, bringing a new front-end featuring a touch of the 'New Edge' design that Ford favours. The swiftest full-production Mondeo - the V6-engined Ghia X arrived soon after. Its creamily smooth V6 engine belts out 168 BHP at 6,250 rpm. Driving through a five speed gearbox this will see the fast Ford to 60 mph in 8.4 seconds and on to a top speed just shy of 140 mph. Available in hatchback, saloon and even estate guise the Mondeo Ghia X rides on independent MacPherson strut front suspension and a multi-link rear axle, whilst 16-inch alloy wheels and low-profile 205/50R16 tyres ensure there's plenty of grip. The steering is geared to keep the driver well in touch with the road and, though it is less tail happy than the smaller Fords such as the Ka and Puma, a small amount of steering can still be done with careful modulation of the loud pedal. The powerful ventilated disc brakes have ABS to prevent skidding and the Mondeo Ghia X also comes with traction control as standard to keep wheelspin in check. Further developments of the V6 engine appeared in the ST200 - a 200 BHP hot rod in sensible shoes that was inspired by Ford's participation in the British Touring Car Championship.

This car can be purchased at the Ford Dealership for 23,850 Credits. 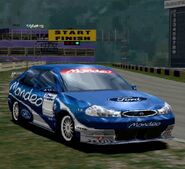 A Ford Mondeo Ghia X 2.5i 24V with racing modifications applied. It appears to resemble the #32 driven by Will Hoy, who achieved 10th place overall in the 1998 BTCC season.

Retrieved from "https://gran-turismo.fandom.com/wiki/Ford_Mondeo_Ghia_X_2.5i_24V?oldid=148014"
Community content is available under CC-BY-SA unless otherwise noted.