The player can choose ten colors upon buying this car:

The SVT Cobra gets the same "New Edge" styling makeover as other Mustangs for 1999, and an increase in power. But that's not the big news. For the first time, the SVT Cobra has independent rear suspension (IRS) for significantly improved handling, especially on bumpy roads. This is a first in the "pony car" class, and also makes the SVT Cobra one of the few rear-wheel drive American cars to ever use an independent rear suspension. The short-and-long arm rear suspension was designed to fit existing mounting points, and so can be retro-fitted to any current-generation Mustang. The SVT Cobra's IRS makes optimum use of its DOHC 4.6-liter engine's new found power. Previous versions weren't exactly weak, but the '99 model gets 320 BHP at 6,000 rpm and 315 lb-ft of torque at 4,750 rpm, and increase of 20 horsepower and 15 lb-ft of torque. With its sophisticated engine and suspension, and a full range of standard creature comforts, the '99 version of the Mustang SVT Cobra is the ultimate pony car.

The player can purchase this car at the Ford dealership for 28,800 Credits. In addition, this car is available from the start in Arcade Mode, where is classified as an A-Class car. 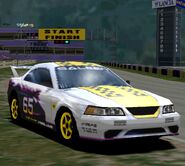 A Ford Mustang SVT Cobra '99 with racing modifications applied. It literally becomes the #65, driven by Steve Saleen, David Warnock, and Robert Schirle, who finished the 1997 12 Hours of Sebring in 20th place overall.

Retrieved from "https://gran-turismo.fandom.com/wiki/Ford_Mustang_SVT_Cobra_%2799?oldid=144523"
Community content is available under CC-BY-SA unless otherwise noted.