The Ford RS200 '84 is a road car produced by Ford. It first appears in Gran Turismo 2 (as the RS200 Rally Car), and has returned in every main game since, except Gran Turismo 3: A-Spec and Gran Turismo Sport.

There are only two colors available for this vehicle, they are unnamed in-game:

"The monster machine with F1 level performance; born in the days of Group B racing."

In 1984, the WRC ushered in the now legendary Group B era. Group B regulations required that only 200 homologation cars can be produced every 12 months. Because of this, it was easy for manufacturers to develop machines especially for the WRC. Among them was Ford, who produced the RS200.

The engine was mounted amidship. It came in the form of a 16-valve DOHC inline-4 known as the Cosworth BDT, an evolution of the BDA. Boosted by a Garrett T4 turbocharger, the engine produced 247 HP in street trim and 420 HP in competition spec. The power could be transmitted to all four wheels via a center differential, but in fact three drive modes were available on the shift lever: "rear-wheel drive, rear-biased full-time 4WD, and balanced torque". The last was selected by locking the center differential.

The overall design was penned by Tony Southgate, a reputed designer of Formula 1 cars. And he was the right guy for the job, because the RS200 was virtually an F1 car for the dirt. However. the final chapter of the RS200 ended prematurely. The RS200 debuted at the 1986 Swedish Rally where it took 3rd place, but soon thereafter, the FIA[1] decided to dissolve the Group B category, and as a result, the RS200's career ended after only four races.

This car can be purchased at the Ford dealership for 100,000 Credits. In this game, this car is called Ford RS200 Rally Car, a name given later to the rally variant of this car.

This car can be won by winning all the races of the Grand Canyon Rally (Easy), under the Special Condition Events.

This car can be purchased for 160,000 Credits. It has a Simple interior. 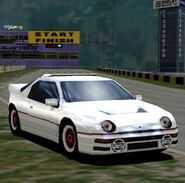 The Ford RS200 '84 as it appears in Gran Turismo 2. It originally had red rims in this game.

Retrieved from "https://gran-turismo.fandom.com/wiki/Ford_RS200_%2784?oldid=153417"
Community content is available under CC-BY-SA unless otherwise noted.