It appears as a Standard car in Gran Turismo 5, but appears to be left behind slightly. However, in GT5, it has its own one-make race series, available in the Extreme Series at level 23 (although the car can only be obtained at Level 24) and it still remains one of the fastest cars available in these games.

In addition, the car costs much less in comparison with the Ferrari F1 Cars and the X2010, and can also be used on other races, unlike the Ferrari F1 Cars, that can race only against other Ferrari F1 Cars in arcade mode only. It reappears in GT6, where it receives new colors, but with the removal of the championship related to this car, the Formula Gran Turismo is no longer necessary to the game's completion.

There are ten colors available for this vehicle, with one secret color in GT4 and six additional new colors for the car in GT6 (although the GT4 black colour did not return for GT6), none of which are named in any of the games:

The following color is only available in GT4 for completing 100% of the game:

The following colors are available only in GT6:

Due to restrictions in both budgets and regulations, the current generation of high-performance open-wheel Formula cars can no longer simply pursue pure speed. But the Gran Turismo team seeks to fill this gap with our own technically-advanced Formula Gran Turismo racer.

Our all-carbon monocoque and bodied machine is outfitted with numerous aerodynamic aids including low-drag/high-downforce front and rear wing assemblies as well as a giant undertray diffuser. Aero work has been performed to the car's underbody as well, rather than a simple flat floor, there are two large tunnels to route air for even more performance-enhancing downforce.

The most advanced electronic driver aids have also been implemented: ABS, TCS, launch control and even EBD for optimized braking capabilities have all been incorporated.

The engine is a 3.5 liter DOHC V12 with four valves per cylinder and a 60-degree V-bank angle. The engine can exceed 18,000 rpm and produces in excess of 888 BHP. The block, pistons and cylinder heads are of aluminum, with hollow titanium valves that are actuated by pneumatic springs.

The result is a formula car that weights around 550 kg and acceleration levels that can exceed 4 G's. This car will lap the Suzuka Circuit in 1 minute 30 seconds and the famed Nurburgring Nordschleife in under 6 minutes. It is quite simply the most potent Formula machine ever conceived.

This car can only be obtained by winning the Nürburgring 24h Endurance. It cannot be purchased at the Polyphony Digital dealership or be tuned. Also, if players finish the game (100% complete), the players can win a black FGT as well.

In the NTSC-J version, the Black FGT is the prize for winning the Formula GT World Championship.

This car can be purchased for 5,000,000 Credits. It also has a new engine sound, resembling more like a real-life Formula One car instead of having a recycled Toyota GT-One engine sound. The secret black colour option and the year of the car was removed in this game.

This car is available from four sources:

The car was, in the first months after the release of the game, also a very popular "trade" car, in that many players were using the gift system to obtain the car from a friend. However, as of the v1.07 update, this car is now ineligible for trade due to its market value being in excess of 1,000,000 Credits. Instead, the player could "borrow" the car from a friend who has chosen to share it, but due to the end of Online Services, it is no longer possible to borrow this car.

This car can be purchased for 2,000,000 Credits (5,000,000 Credits in version 1.00 of the game). The car's exterior was improved and the car has a Detailed interior (added in the Spec II update of GT5, although the fact that the steering wheel OSD is not working prevents the car from being viewed in the Gallery View, thus the car is only considered an upgraded Standard car) and new colours were added, including one that resembles the 2006-2012 McLaren chrome silver/red. The orange colour, which turned reddish in GT5, was changed to a beige/orange one instead. 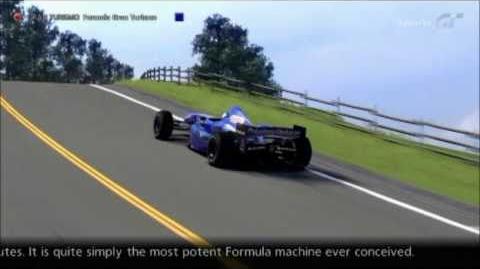 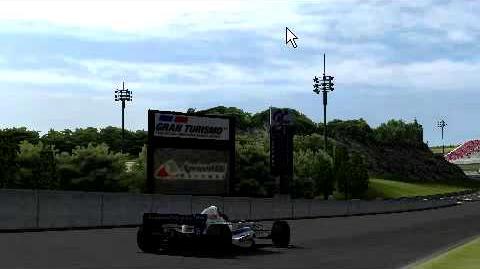 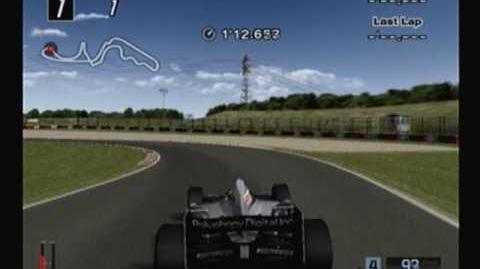 The unique "error" prompt as it appears in GT4.

Racing in the Tokyo R246 course.

Racing at the Test Course.

The black version of the Formula Gran Turismo in GT4, racing at Trial Mountain.

The black version of the Formula Gran Turismo in GT4 (NTSC-J).

A White Formula Gran Turismo in GT4. As stated above, this particular colour scheme originally had "Mobil" logos in earlier games.

A Formula Gran Turismo in GT5, racing at the Cote D'azur track.