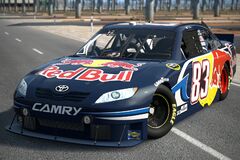 Red Bull Racing started their challenge in NASCAR with their entry in the Toyota Sprint Cup in 2007. They were a team built completely from scratch, having had no factory or driver to start with. That is why Red Bull Racing did not get around to having their own development centre, and used equipment developed straight out of TRD USA, Toyota's front line R&D base in the US. They were often jokingly referred to as Team Toyota at the time because of this deep relationship.

The driver Brian Vickers was a man who had continued to support this brand new team. Vickers drove for the Chevrolet team Hendrick Motorsports for some time, and had become the youngest champion ever in the Busch series at 20 years of age back in 2002. He was then said to be the upcoming championship contender, but with team issues he left them in 2006, and joined Red Bull Racing.

Initially the team was plagued with problems due to their lack of experience, not even qualifying in several races, and there were tough times for the whole team. Vickers did not give up though, and kept pulling the team forward. As a result of working diligently over the years together with Toyota, in their third year of 2009 he achieved a pole to win in the 23rd round at Michigan, at last bringing home their first victory. He went on to gain pole position 6 times, and pushing aside Toyota Ace Driver Kyle Busch, he went forward to participate in the Chase for the Sprint Cup.

Retrieved from "https://gran-turismo.fandom.com/wiki/GT5_Transcripts/2010_Brian_Vickers_%E2%99%AF83_Red_Bull_TOYOTA_CAMRY_%2710?oldid=141682"
Community content is available under CC-BY-SA unless otherwise noted.