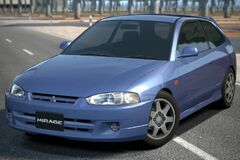 The 5th generation Mirage, which debuted 1995. Since its inception in 1978, each generation of the Mirage had changed its lines to survive in the small front wheel drive hatchback market. With this model, a more conservative approach was taken, only maturing some highlights of the fourth generation. As a result and regrettably, this became the last model of the Mirage.

Apart from that, the main points of the 5th generation Mirage were expanded variety and value for money. It made use of the same seven engine types as the previous models, with separate designs for the 4-door and 3-door models. Despite this, it was established as more of a bargain than its rivals.

The design of the 3-door model was roughly the same as the older model. The modest, rounded design was easy to market to women. Meanwhile, the 4-door had once again adopted the same body as the Lancer. The linear design was more masculine than the 3-door version, and it is possible that they already had the Lancer Evolution in mind, which would be built based on this body.

In size, it was smaller than the previous versions. Using the same chassis as previous models, the 3-door maintained its overall width and height but shortened its length by 3.1 inches while still maintaining the same interior space as before. Due to the influence of the design, the 4-door was 0.5 inches taller and wider than before, but the total length was exactly the same.

A Cyborg model was also offered once more, equipped with a 1.6L straight-4 DOHC MIVEC. There were no changes to the 173 BHP/17.0 kgfm specs. The full option Cyborg ZR version was equipped with power windows and 15" tyres, while the RS version was a competition base model with simplified equipment.

Retrieved from "https://gran-turismo.fandom.com/wiki/GT5_Transcripts/Mitsubishi_MIRAGE_CYBORG_ZR_%2797?oldid=135505"
Community content is available under CC-BY-SA unless otherwise noted.