Gran Turismo 3: A-Spec (commonly abbreviated to GT3) is a driving simulator / racing game for the PlayStation 2. GT3 was developed by Polyphony Digital and published by Sony Computer Entertainment in 2001. The games serves as a sequel to Gran Turismo 2 on the original PlayStation. It was met with critical acclaim, both publicly and critically, shipping 1.89 million copies in Japan, 10,000 in Southeast Asia, 7.14 million in North America, and 5.85 million in Europe for a total of 14.89 million copies as of April 30, 2008, making it the best-selling game in the Gran Turismo franchise. The title received an average of 95% in Metacritic's aggregate.

Gran Turismo 3: A-Spec is fundamentally based on the racing game genre. The player must maneuver an automobile to compete against artificially intelligent drivers on various race tracks. The game uses two different modes: Arcade and Simulation.

The Arcade Mode has been reorganized into "stages". These stages are made up of five to six tracks pooled from all available courses in the game, including dirt courses. To progress and unlock the next stage, all tracks on a stage must be completed on Easy difficulty or higher. By beating the stage on Normal or Difficult, additional cars are unlocked for play.

The Simulation Mode also has a reorganized layout, with a more structured and progressive arrangement of races and challenges. Races vary from short beginner events to multi-hour endurance races, and includes dirt rally events against an opponent. In addition, the car dealerships are now organized by country and then by manufacturer, which some find to be more intuitive than the North/South/East/West City method used in its predecessor. On the downside, far fewer vehicles are available in Gran Turismo 3: A-spec (187 in total) than Gran Turismo 2 (just under 620). This is attributed largely to the work needed for the more detailed graphics, providing detailed statistics for all the cars and the game's release being early in the PlayStation 2's lifespan.

New to the franchise, Formula One (F1) cars can be obtained. However, they cannot be purchased, they are only unlocked by winning endurance races or certain championship events. In the PAL version of the game, there are two F1 cars available, the Polyphony001 and Polyphony002. In the NTSC version of the game, there are six F1 cars, the F094/H, F094/S, F686/M, F687/S, F090/S and F688/S. As expected, they perform significantly better than the other vehicles featured in the game, however, they wear out tires in less laps than usual and players cannot buy harder tire compounds to compensate for this.

Omitted from GT3 is the ability to perform Racing Modifications on production cars, removal of suspension damage and removal of power limits on race events.

Polyphony Digital collaborated with computer and game console peripheral manufacturer Logitech for the game, which resulted in the GT Force steering wheel. The wheel features force feedback and was designed specifically for GT3.

A demo copy of the game was shown during the 2000 PlayStation Festival, allowing players to drive a Mitsubishi Lancer Evolution V GSR '98 on the Seattle Circuit for 120 seconds.

Compared to Gran Turismo 2, the graphics are greatly improved thanks to the newer PlayStation 2 hardware but the number of cars has been drastically reduced due to the large amount of work devoted to the graphics, modelling structure, detailed statistics of all cars and the game's release being early in the PlayStation 2's lifespan. Around 187 cars are featured in the game, depending on the disc region.

A giveaway was launched at release, and it included Gran Turismo merchandise and branded clothing. In North America, winners could receive a day at the Skip Barber Racing School, or car payments for a month.

Gran Turismo 3: A-Spec was met with critical acclaim from game critics. It received an aggregated score of 94.54% on GameRankings and 95/100 on Metacritic, placing it among the top 50 of all games on the multi-platform site and in the top 10 of PlayStation 2 titles. It has appeared on some 'Top 100 Games' lists such as that by IGN in 2003.

"The gameplay may be a little too deep and difficult for many, but for its core followers, Gran Turismo is the be all and end all of digital racing, and GT3 has been voted as the best of the bunch." - IGN

Gran Turismo 3 sold 1 million copies in its first three days of release. By July 2006, it had sold 3.8 million copies and earned $120 million in the United States alone. Next Generation ranked it as the third highest-selling game launched for the PlayStation 2, Xbox or GameCube between January 2000 and July 2006 in that country. The game also received a "Double Platinum" sales award from the Entertainment and Leisure Software Publishers Association (ELSPA), indicating sales of at least 600,000 copies in the United Kingdom.

Like the previous and following game, the soundtrack to Gran Turismo 3: A-Spec varies somewhat between game region. 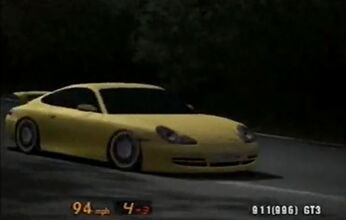 A Porsche 911 GT3, which can be obtained only through game code. 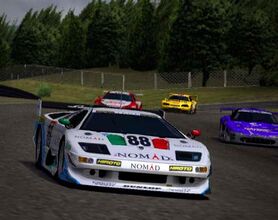 A JGTC Lamborghini Diablo that can only be bought in the Japanese version of the game.
Add a photo to this gallery 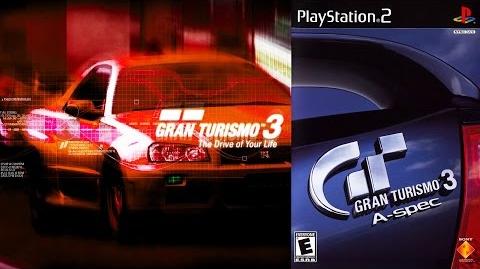