Gran Turismo Sport is a racing video game developed by Polyphony Digital and published by Sony Interactive Entertainment. It was announced during the 2015 Paris Games Week and is the thirteenth game overall in the Gran Turismo series and the first game to be released for the PlayStation 4. It was launched worldwide on October 17th, 2017.

A notable aspect in the game is that it is supported by the official governing body of motorsport, the Fédération Internationale de l'Automobile (FIA). As such, they sanction the multiplayer events found in the game.

Gran Turismo Sport can also be played on the PlayStation 5 using it's PlayStation 4 backwards compatiblilty.[1]

Gran Turismo Sport includes two game modes: "Sports Mode" , "Arcade Mode" and more. Online racing is also featured in the game. It has been described as different from the "Prologue" titles released in the past and features more content. Unlike Gran Turismo 5 and Gran Turismo 6, the game does not feature a dynamic weather system and day-night cycle. However, players still have the option to modify the race's time of day before entering the race. For the first time in the series, the game features Porsche vehicles, after Electronic Arts had lost their exclusive licensing rights to the Porsche brand (previous Gran Turismo games only included RUF as a substitute).

Gran Turismo Sport was originally announced to be fully compatible with Sony's virtual reality headset, PlayStation VR. The experience while playing was described by series creator Kazunori Yamauchi as "very good and very natural". However, it was announced later that VR support would be limited to a special "VR Tour" Mode.

Polyphony Digital and TAG Heuer announced a partnership for the game. TAG Heuer serves as the timekeeper and watch brand for Gran Turismo Sport, where its "Live Timing Technology" is utilized to measure all in-game time. Additionally, TAG Heuer is integrated into the "museum" section of Gran Turismo Sport, showcasing the history of the Swiss watch maker.

The TAG Heuer partnership expired in early 2020, with TAG Heuer branding and the museum being removed from most areas of the game, except for Livery Editor decals and trackside sponsorship.[2]

With support and certification of the FIA, the central aspect of the game is the FIA-Certified Gran Turismo Championships, consisting of two championships held simultaneously throughout the year: the Nations Cup, where players represented country, and the Manufacturers Series, where players represent their favorite car manufacturer. The FIA managed the series directly as they would with any of their other race series. The winners of the championships are honored at the FIA's annual prize-giving ceremony in Paris, France.

The Nations Cup and the Manufacturers Series featured "live" components similar to the regional finals held in the GT Academy competition, dubbed Gran Turismo World Tour, which are streamed in-game on Gran Turismo LIVE feature as well on Gran Turismo TV YouTube channel and PlayStation's Twitch channel. Organized online events are held on a regular basis within the game's Sport Mode, which also features daily online races that are not part of official FIA championships, as well as third-party championships such as the Toyota Gazoo Racing GT Cup (formerly the GR Supra GT Cup).

In 2020 and 2021, due to the COVID-19 pandemic, the live World Tour events were replaced with online special events; these races are played in advance with competitors being forbidden from disclosing the outcome of the race until it has been aired, and then aired on tape delay basis.

The championship events were held from 2018 to 2021, with a transitional "Road to GT7 Series" online championship held in February 2022 serving as a farewell event before the release of the the sequel.

Campaign Mode is the main single player mode of the game, replacing the well known Simulation Mode (GT Mode in the PAL and NTSC-J versions). It is divided into four categories plus a fifth one, which is paid DLC:

Arcade Mode is the second single player mode that is available for the player to use in Gran Turismo Sport. It is divided into six categories:

There are currently 82 (as of update v1.56) circuits in Gran Turismo Sport. 27 are real-world circuits, 23 are original courses designed by Polyphony Digital, 6 are city street circuits, set on sections of the Tokyo Expressway, and 3 are dirt rally courses.

Compared to previous titles, Gran Turismo Sport features less vehicles than previous entries. However, unlike in Gran Turismo 5 and Gran Turismo 6 where only select models had detailed interiors, most vehicles are now fully detailed. There are currently 338 (as of update v1.66) cars in GT Sport.

Polyphony Digital expected Gran Turismo Sport to have largely improved gameplay elements due to the enhanced processing power of the PlayStation 4. The game is the first in the Gran Turismo series to support the virtual reality headset PlayStation VR. A beta was scheduled to take place in the first and second quarter of 2016 before a full release on 15 November, but Sony later announced that the beta had been cancelled so as to prevent the game from being delayed to 2017. On 30 August 2016 it had been announced that the game will be delayed to 2017 to further polish the game.

Despite the cancellation of the beta for the game in 2016, a closed beta was confirmed for 17 March 2017 for selected users in the United States and Europe to experience the game's features prior to its release.

So far, there have been thirty content updates for Gran Turismo Sport, released monthly since November 2017; however, the update frequency were reduced from 2020 onwards. For the full list and details, see the link above. 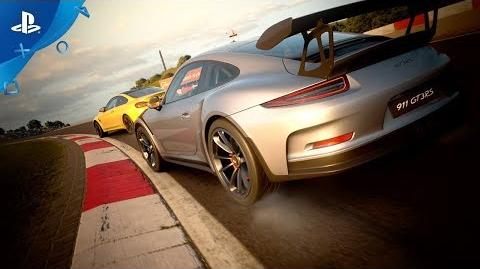