Edit
watch 02:17
New Pokemon Games - The Loop
Do you like this video?
Play Sound

The High Speed Ring has been featured in Gran Turismo, Gran Turismo 2, Gran Turismo 4,Tourist Trophy, Gran Turismo 5 Prologue, Gran Turismo 5 and Gran Turismo 6. The course is situated in the north side of Japan, according to Gran Turismo 7. Variable weather conditions are available in GT5. It has also appeared in Gran Turismo PSP. The first time the circuit was featured in the original GT, it was in a partially cleared forest with a mountainous background. When the Ring came to GT2, there were little changes made to the track other than small graphical boosts. After being absent in GT3, the High Speed Ring got a major overhaul for GT4; the pit entry was extended to the entry of the final corner when going on the forward circuit, the forest look has been ousted for a plain with a lake in the inside of the track, there is a new bridge after the 2nd turn, and there is a way to manually drive into the pit stop without actually pitting in. In GT5, after the major overhaul in the previous game, the track design has been refined again to make use of the power of the PlayStation 3 console. This version of the track was originally included in GT5 Prologue. From GT5 onwards, this track can also be played in wet weather. The circuit returned in GT6, with even more graphical enhancements for the PlayStation 3. In Gran Turismo 7, the track has been given a redesign like Trial Mountain Circuit, with its main difference from the track layout is a stretched second, banked turn.

Events marked with an asterisk are raced in reverse.

Accelerate down the main straight towards the long, banked sweeping turn 1. This turn gets ever so slightly tighter on itself in the latter stages; gradually move the car from the outside banking towards the inside apex, then allow the car to drift back towards the outside as you exit. If done correctly, you should be able to take this turn at full throttle without needing to lift off the throttle. Avoid reducing your speed as much as possible.

Turn 2 is the hardest braking point on the track. Start braking at the 100m marker board on the right to reduce the cars speed on approach. Turn 2 is banked, so it is possible to take it with more throttle than you otherwise would be able to. Use an out-in-out line to navigate this turn.

Turns 3 and 4 form a long and wide S-bend. This is a deceptively simple section of the track, as it is easy to come down on the throttle early and understeer towards the outer wall. The trick is to control your throttle and treat both corners as if they were a large chicane.

Move from the right side of the track to the left, and begin braking at the 50m marker board. Set your apex late for turn 3 and aim to exit in a middle line for turn 4, and stay on the inside kerb until you can see the tunnel. The ideal racing line here is out-in-middle-in-out.

(NOTE: In the PS1 Gran Turismo games, this section of the track is banked and therefore can be taken at a higher speed.)

Turn 5 can be taken flat out. Keep to the inside as you approach turn 6, or you will severely affect your time and exit speed onto the straight. Brake again at the 50m marker board, then enter turn 6 with the aim to go flat out. This turn is banked, but it can be easy to drift towards the outside and glance the wall. Stay off the wall and keep your speed up to maximize your speed down the straight.

The race begins with all six cars stationary. Therefore qualifying is not so important for this track. 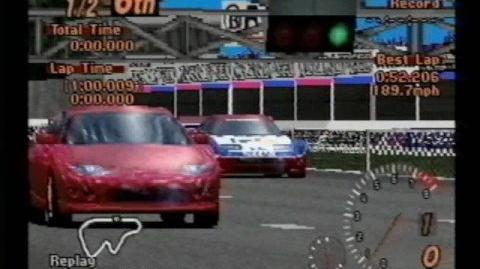 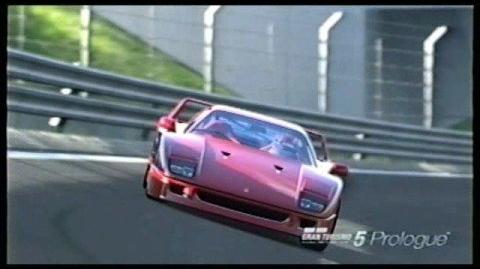