The Honda Accord SiR '96 is a Road car produced by Honda. It so far appeared only in the original Gran Turismo and in Gran Turismo 2.

This description is taken from the PAL version of the original Gran Turismo:

The current Accord, launched in 1993, is only available as a 3-number body. The styling of the 4-door saloon exudes Honda's unique sportiness. There is a choice of three engines, the most interesting of which is the 2.2-litre inline 4-cylinder DOHC H22A VTEC engine fitted in the SiR. Its specifications of 190 PS / 6800 rpm and 21.0 kgm / 5500 rpm transform the Accord into a wonderful sports saloon. It is available with 5-speed manual or 4-speed automatic transmission. Suspension is 4-wheel double-wishbone. The SiR has 4-wheel disc brakes, sporty rear wing and 205/55 R15 size tyres. The Accord's VTEC engine turns round very smoothly in all ranges. Accord is thus packed with great potential and very sporty for a saloon. If you can fully extract that potential it will give you an extremely rewarding drive.

This car can be bought at the Honda New Cars Dealership for 23,540 Credits. The car's name is listed as Honda Accord Sedan in the NTSC-U version of the game.

This car can be purchased at the Honda Used Cars Dealership for around 12,000 Credits. Racing modifications for this car cost 82,000 Credits. The car's name is listed as Honda Accord Sedan '96 in the international versions of the game. 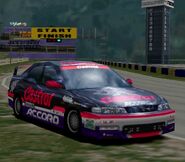 A Honda Accord SiR '96 with racing modifications applied. It appears to resemble the #16, driven by Osamu Nakako, who achieved 1st place overall in the 1996 JTCC season.

The vehicle banner as it appears in the NTSC-J version of Gran Turismo 2.

The vehicle banner as it appears in the international versions of Gran Turismo 2.

The unused Castrol Mugen Accord banner, possibly linked to the racing modifications of this car.
Add a photo to this gallery

Retrieved from "https://gran-turismo.fandom.com/wiki/Honda_Accord_SiR_%2796?oldid=135811"
Community content is available under CC-BY-SA unless otherwise noted.