The Honda Accord Wagon SiR '96 is a Road car produced by Honda. It so far only appeared in the original Gran Turismo and in Gran Turismo 2.

This description is taken from the PAL version of the original Gran Turismo:

This second generation Wagon appeared in 1994. Designed to satisfy US demand, it was very stylish with a sporty aura about it. Initially the engine was a front-mounted VTEC 2.2-litre inline 4-cylinder SOHC F22B unit that produced 145 PS / 5500 rpm and 20.2 kgm / 4500 rpm. However, in 1996 it was also given the VTEC 2.2-litre inline 4-cylinder DOHC engine, which delivered 190 PS / 6800 rpm and 21.0 kgm / 5500 rpm. Suspension is 4-wheel double-wishbone, and all cars have ventilated discs on front wheels and discs on rear wheels. It is considered to be sporty, but the body is obviously an impediment to aggressive driving. The engine turns over relatively smoothly and gives a moderately sporty drive with easy handling. It places more emphasis on comfort than speed, but provides a fascinating base for further tuning.

This car can be bought at the Honda New Cars Dealership for 26,980 Credits. The car's name is listed as Honda Accord Wagon in the NTSC-U version of the game.

This car can be purchased at the Honda Used Cars Dealership for around 16,000-20,000 Credits. Racing modifications for this car cost 82,000 Credits. The car's name is listed as Honda Accord Wagon '96 in the international versions of the game. 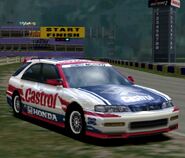 A Honda Accord Wagon SiR '96 with racing modifications applied.

The vehicle banner as it appears in the NTSC-J version of Gran Turismo 2.

The vehicle banner as it appears in the international versions of Gran Turismo 2.
Add a photo to this gallery

Retrieved from "https://gran-turismo.fandom.com/wiki/Honda_Accord_Wagon_SiR_%2796?oldid=144071"
Community content is available under CC-BY-SA unless otherwise noted.